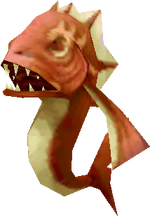 Sea Devil (シーデビル, Shīdebiru?) is a recurring creature in the series.

Sea Devil is an enemy fought at Subterranean Lake. It fights using a basic physical attack and is generally of no threat to the party.

Sea Devil is an enemy fought at sea in the merged world between Crescent and Fork Tower. They fight using physical attacks, and have the valuable Defender to steal, but the enemy is one of the rarest in the game.

Legends tell of giant sea devils emerging from the sea to wrap their many arms around ships and drag them to the abyss. This seems impossible today, as the largest catches in recent memory are little more than a yalm across.

This section about an enemy in Final Fantasy XV is empty or needs to be expanded. You can help the Final Fantasy Wiki by expanding it.

Sea Devil is an enemy fought in the Challenge Dungeon for the Bard, and is dummied in all versions but the original release. They fight using Tentacle.

This gallery is incomplete and requires Pictlogica Final Fantasy [????] added. You can help the Final Fantasy Wiki by uploading images.
Enemies
Community content is available under CC-BY-SA unless otherwise noted.
Advertisement