An expanse of boundless blue.

The sea (海, Umi?), also called ocean, is a recurring terrain type on the world map in the Final Fantasy series. It is a feature in most maps and cannot be traveled on without use of another vehicle, such as a boat, a canoe, or a submarine. Many vehicles that can only travel on certain depths, for example, the canoe and buggy, can only travel over shallows, while various types of advanced chocobo can travel over deeper water, but not the entire ocean.

The sea is used to separate continents and keeps the player from progressing to later parts of the game. An example of this is in the original Final Fantasy where the player starts limited to Cornelia and the Chaos Shrine. The player must complete the events of the Chaos Shrine dungeon to trigger the finishing of the Drawbridge to bridge the continents leading to further areas.

Sometimes enemies can be fought in the sea. In the earlier entries of the Final Fantasy series, players would get into random encounters when traveling over the sea in a boat. These encounters can still be escaped from.

Notable world maps lacking seas include the Underworld and Moon from Final Fantasy IV. The former uses lava as a replacement.

The only way to travel by sea is via the pirate ship, obtainable by defeating the pirates at Pravoka. At first the player can only sail between the Cornelia, Pravoka and Elfheim in the inner sea, but once the Nitro Powder is used to clear a new passageway the player can sail through all deep waters.

Random encounters can occur while on the sea, but they are not as frequent as on land.

The player can travel by sea using Leila's ship.

The player can travel by sea with the Enterprise, and underwater after the Nautilus is enchanted by Doga.

The sea separates the continents. To cross it, ships sail regularly between Nikeah and South Figaro and later the airships Blackjack or Falcon can be utilized. In the World of Balance there is also an underwater passage Serpent Trench which requires special gear to traverse and has random encounters. Originally boat rides did not have monster encounters, but a sea battle against Leviathan was added to the Advance version and becomes available in the World of Ruin.

The sea separates each continent. The ways to cross the sea are using the Tiny Bronco, Highwind, submarine, Cargo Ship from Costa del Sol or a gold chocobo. The Bottom of the Sea is explorable via the submarine where one can find the sunken Gelnika and Emerald Weapon. The Junon Underwater Reactor can also be seen, but not entered, from the sea, as going through Junon is the only way to reach it.

The sea has few ways to cross it: Balamb Garden, once it becomes mobile, and the Ragnarok. A SeeD Assault Boat is used during the Siege of Dollet. Chocobos can cross shallow water and are the means of reaching the Ragnarok during endgame. The White SeeD Ship appears as a location in the sea during a storyline event.

There are several boats and airships to explore Gaia with: the Blue Narciss, Hilda Garde I, and the Hilda Garde III, and the Invincible. The M.S. Prima Vista, the Red Rose, used as a warship by Queen Brahne, the Alexandrian Fleet, the Cargo Ship, and Hilda Garde II also appear in the story but cannot be controlled by the party. The party can also cross the oceans with Choco who learns new abilities to cross terrain by visiting Chocobo's Dream World.

The points of interest on the waters include some chocograph treasures and "secret bubbles" where an ocean-faring Choco can dive with a Dead Pepper. Zidane's ultimate weapon is found from one such ocean bubble in the endgame. Chocobo's Air Garden also sometimes appears in the middle of the world map, above the seas, but Choco must be flying to reach there.

At Besaid's beach the water can be swam in, but not far from the shore. Baaj Temple in the middle of the ocean can be swam in as well. In Kilika and other locations the ocean is simply a background feature. The boss Geosgaeno is fought twice underwater, once at the start of the game and once after the player acquires the airship as an optional fight.

The sea is otherwise seen on the map when selecting a location for the airship. Oceans make up a considerable portion of Spira and Tidus's Zanarkand is located far out in the sea. The seas are not roamed much because of the threat of Sin. To travel between the islands the chocobo-powered ships S.S. Liki and S.S. Winno are used.

The sea appears in a variety of places. Dalmasca Estersand has a river that can be crossed midway through the game and has a fishing minigame once the player has acquired a fishing rod. The Ogir-Yensa Sandsea and Nam-Yensa Sandsea are characterised by sand that moves like water, hence their name.

Being on an island, the La Noscea region is surrounded by sea. Some instanced duties have players fighting on-board a ship. The primal Leviathan is fought on a barge floating out at sea.

There's a terrain tile called Sea in the PlayStation version, but the newer translations change it to Ocean. These tiles appear on the battlefield maps of Dorter Slums, Brigands' Den, Port City of Warjilis, random battles in Fovoham Windflats, and Orbonne Monastery.

A Geomancer standing on the Ocean terrain tile will use Torrent to deal Water-elemental damage with a chance of inflicting Toad to any enemy units within five squares.

Chocobot can go on water, allowing it to carry Sumo across rivers and the ocean. On the ocean, the Sea Dragons and Sahagins populates the area. Chocobot can access the ocean from the wooden piers found on coastal areas. 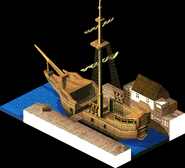 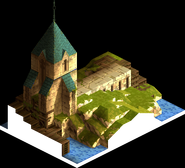 The sea, the world ocean, or simply the ocean, is the connected body of salty water that covers over 70 percent of the Earth's surface.