Screech (パニックボイス, Panikkuboisu?) is a recurring ability in the Final Fantasy series, primarily appearing in the Ivalice Alliance used by Wolf-type enemies.

Screech is an enemy ability used by Ochu and Neochu. It deals moderate physical damage over a large radius, removes status enhancements, and bestows nearby Microchus or Picochus with Bravery. Neochu's Screech deals heavy damage and also bestows Haste.

Screech is an enemy ability used by Ochu. It functions similarly to before.

Screech is a Blue Magic spell learned from most Wolf enemies. It deals small non-elemental damage to a target 3 squares away from the caster and attempts to confuse it. The spell costs 8 MP to cast. 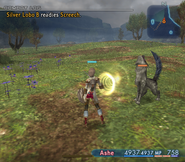