"Why do men craft such intricate yet ultimately flawed weapons, when nature has already supplied us with the perfect design?" - The Study of Arms

The Scorpion Tail (蠍のしっぽ or 蠍の尻尾, Sasori no Shippo?) is a recurring weapon in the Final Fantasy series.

Flail shaped like a stinger and enchanted with Bio.

The Scorpion Tail is a mace, or flail, and Gogo's ultimate weapon. It is obtained in the Dragons' Den after defeating the upgraded version of the Skull Dragon. True to its name, it is of the Poison element and has a 25% chance of casting Bio on attack. It has an attack power of 225, grants +4 Strength, Speed, Stamina and Magic.

It can be bought at the Bazaar for 60,000 gil after selling Charged Gizzard x3, Wrym Bone x3, and Scorpio Gem x4. It costs 60,000 gil, and can only be equipped by characters who have unlocked the Axes and Hammers 7 license for 70 LP.

In the Zodiac versions, in now provides 124 Attack, 2 Evade, 32 CT, 8% combo rate, and requires the Axes & Hammers 7 license for 85 LP. it can be found as a treasure in Cerobi Steppe (Crossfield), or dropped by Glaring Eye (3% chance).

The stronger version, Vrscika (Scorpion Tail F in International) provides 133 Attack, 5 Evade, 32 CT, 20% combo rate and requires the Vrscika license for 175 LP. it can be bought from the bazaar for 70,000 gil after selling Wyrm Bone x3, Charged Gizzard x3, and Scorpio Gem x4 to the Bazaar. Both weapons can be equipped by the Foebreaker class.

A large morning star with a single spike attached to it.

The Scorpion Tail is the most powerful mace with the Weapon Power of 23. It is a poach from Hydras (rare), or it can be alternatively caught from a highest level Ninja in the Deep Dungeon. It can also be obtained via Rendezvous.

The Scorpion Tail is a mace and is used by Sages and Alchemists, and provides +38 Attack, +2 Magic, and +5 Resistance. The Alchemist learns its ultimate spell, Meteor, from this mace. It can be a random reward for completing a mission, or stolen from the Alchemist after he equips it during Mission #22: Present Day. This is only possible after stealing his initial weapon, then stealing from him again.

The Scorpion Tail reappears as a weapon for the Sage and teaches the spell Protometeor to the Alchemist. It provides +48 Attack and +5 Resistance, and can be bought for 7,200 gil in the shop after creating it in the Bazaar after using a Wind Sigil, Crusite Alloy, and Aurea Pollen. 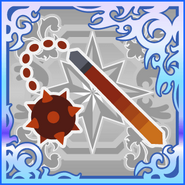 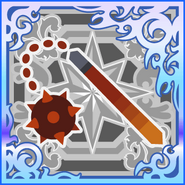