Final Fantasy Wiki
Register
Don't have an account?
Sign In
Advertisement
in: Summons in Final Fantasy Crystal Chronicles: My Life as a Darklord 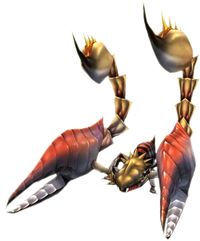 Scorpion is one of the monsters available for Mira to summon in Final Fantasy Crystal Chronicles: My Life as a Darklord. Players unlock Scorpion early in the game.

Scorpions attack by shooting stingers from their tails. They are proficient at dispatching and resisting magic users, but melee attackers will resist the Scorpion's attacks and tear them apart at close range. In combat with adventurers who use ranged attacks, both the Scorpion and the adventurer will take very little damage from each other.