Detects by Sound
List of Scorpion Enemies
Scorpions are large, armored vermin in Final Fantasy XI. They inhabit varied environments, ranging from the parched Altepa Desert to the damp corridors of the Crawlers' Nest. Some can even be found in the frigid tunnels of the Ranguemont Pass. They boast a large repertoire of deadly attacks including noxious breath, poison-inducing stings, and most famously, a brutal strike with their scissor-like tails. Though all scorpions in present day Vana'diel are a dark brown color, a subspecies called scolopendrid was seen with a golden, lustrous shell during the Crystal War. Inclined to feed on anything smaller than themselves, scorpions happily indulge their carnivorous nature by preying upon hapless adventurers.

Scorpions are often hunted for their claws, which are used to make arrows or ground into a poisonous powder, and shells, from which armor can be made. Many of the more notorious and vicious scorpions are known to drop claws containing a potent venom. These are highly sought for the creation of a body armor that increases the wearer's evasion and accuracy. 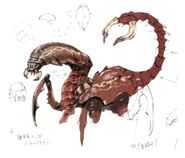 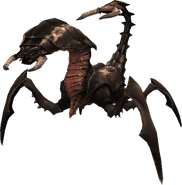 A variation of the scorpion. 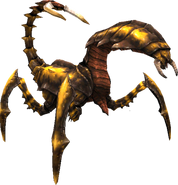 The Scolopendrid subspecies in Wings of the Goddess areas. 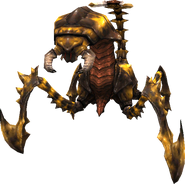