Order of warriors and scholars

Merger between Circle of Knowing, Path of the Twelve

We are the Scions of the Seventh Dawn, an order that transcends political boundaries. Our single objective is the preservation of the future of Eorzea.

The Scions of the Seventh Dawn is an order in Final Fantasy XIV that was formed by the combination of the Circle of Knowing with the Path of the Twelve following the Seventh Umbral Era. The Waking Sands, their initial headquarters, was located in Vesper Bay, Western Thanalan. Currently, they are located in The Rising Stones in Revenant's Toll, Mor Dhona.

The Scions were formed through a merger of the remaining Circle of Knowing and Path of the Twelve members in the aftermath of the Seventh Umbral Calamity, as per Louisoix's last wishes. As Eorzea struggled to rebuild in the Seventh Umbral Era, the Scions kept watch over the activities of the beast-tribes and Garlean Empire, as well as the enigmatic Ascians.

The Warrior of Light was initially recruited to become a member due to their proficiency in using the Echo. They are directed to the Waking Sands with the password "wild rose" in order to prove their identity to the otherwise illusive organization. As part of the Scions, the Warrior of Light keeps tabs on the beast-tribes and the masked Ascians, eventually slaying Ifrit and Titan.

When the Warrior of Light returns triumphant after defeating Titan, they witness a scene of carnage with the majority of Scions dead or believed missing, and a dying Noraxia who relays Minfilia's last words before her abduction. Through the Echo, the Warrior of Light learns Garlean Tribunus Livia sas Junius raided the Waking Sands to capture Minfilia and the other Scions, killing anyone else. Though the Scions are publicly believed to be disbanded, Alphinaud Leveilleur tracks down both the Warrior of Light and an amnesiac Cid nan Garlond to revive the Scions and confront the awakened Garuda.

Their victory over the Lady of Vortex is short lived, as Legatus Gaius van Baelsar reveals his trump card: the Ultima Weapon that effortlessly absorbs the primals. As Gaius issues his ultimatum to the city-states and beast-tribes of Eorzea, the Warrior of Light regroups with the remaining Scions to rescue Minfilia and the others from Castrum Centri. As they narrowly escape from the Ultima Weapon, they learn the Ascian overlord Lahabrea had possessed Thancred and had been working with the Gaius and the Garlean Empire.

Now mostly restored, the Scions convince the leaders of Eorzea to unite against the Legatus and the Ultima Weapon. Through Operation Archon, the combined military might cuts off the Legatus' supports, enabling the Warrior of Light to confront him and his weapon. The Ultima Weapon destroyed, the Warrior of Light confronts Lahabrea, and—using the Crystals of Light—expels him from Thancred's body. With the threat of Gaius van Baelsar gone, the Scions turn their attentions back to the primals.

Due to increasing pressure from the Syndicate, the Scions relocate to the Rising Stones in Revenant's Toll, Mor Dhona, which is outside any city-state's jurisdiction. Alphinaud begins to found a Grand Company called the Crystal Braves, as he feels the Scions are in need of a military force to cover the gaps between the other Grand Companies. The Scions conduct research into stopping the Ascian menace using White Auracite, where it is proven to work against Nabriales.

It later comes to light that the Crystal Braves were secretly funded by Teledji Adeledji of the Ul'dahn Monetarists, and Grand Crystal Marshal Ilberd Feare holds grudges against both Raubahn Aldynn and the Warrior of Light. At the banquet to celebrate the Defense of Ishgard, the Scions are framed for the apparent assassination of Nanamo Ul Namo. During the escape from the royal palace, with Brass Blades and turncoat Crystal Braves in pursuit, most of the Scions are separated and remain unaccounted for. Only the Warrior of Light, Alphinaud, and Tataru Taru flee to Coerthas to seek asylum in the Holy See.

Lord Haurchefant of Camp Dragonhead, the Scions' old friend, arranges for their protection. His father, Count Edmont de Fortemps, declares the Scions wards of House Fortemps, and permits them to cross the Steps of Faith. As part of his hospitality, Fortemps Manor becomes the Scions' temporary new home.

When Ishgard comes under the threat of a new massing of the Dravanian Horde under Nidhogg's command, Alphinaud hopes to parley peace to spare further bloodshed. Accompanied by Estinien Wyrmblood, the Warrior of Light and Alphinaud meet with Ysayle Dangoulain of the heretics. She takes them to meet with the peaceful great wyrm Hraesvelgr to find a way to stay Nidhogg's wrath. The journey into Dravania is fraught with peril as they run afoul of the gnath and their new primal Ravana before they can climb sacred mountain Sohm Al. Atop the Churning Mists they discover a village of moogles who guide them to Hraesvelgr. The great wyrm recounts the truth of King Thordan's betrayal against the dragons that started the Dragonsong War, and explains the extent of Nidhogg's quest for vengeance against Ishgard.

The only remaining option to halt the Dravanian Horde is for the Warrior of Light and Estinien to slay the vengeful Nidhogg. Upon doing so, they discover Nidhogg had been in possession of one of Hraesvelgr's eyes. Since Haldrath had taken Nidhogg's eyes, and the Azure Dragoon had only been powered by the left eye, Estinien is concerned about the fate of the missing eye. Suspicions fall upon Archbishop Thordan VII and the Ishgardian Orthodox Church, as the streets fill with rioting heretics who infiltrated the city-walls.

The riot is a plot by Thordan VII and his Heavens' Ward to instill fear in the populace despite Nidhogg's defeat. Altercations with the Heavens' Ward soon reveal why: the millennium-long faith in the legend of King Thordan and his Twelve Knights was how they became a primal. The pursuit of the Archbishop into the Sea of Clouds leads to Azys Lla, an Allagan superstructure floating above Abalathia's Spine. To complicate matters, the Garlean VIth Imperial Legion is also after the archbishop, with Alphinaud and the Warrior of Light coming face-to-face with both Legatus Regula van Hydrus and Emperor Varis zos Galvus.

Unable to get past an powerful barrier around Azys Lla, the Scions return to Ishgard where they learn of the whereabouts of one of the missing members. With the help of Kan-E-Senna, Y'shtola Rhul is rescued from the Lifestream after she used a forbidden magic to escape pursuit. Rejoining the Scions and informed of the current situation, she suggests they seek out her mentor Matoya in Dravania. The elderly scholar recognizes the name Azys Lla as a place where ancient Allag conducted research on primals and dragons. Using a tome containing her concepts for an aetheric ram, Cid outfits the remodeled Enterprise with a prototype using Nidhogg's eye, piercing the barrier around the floating continent.

With the Scions and Garleans clashing over the Azys Lla, the Warrior of Light goes on ahead to the central structure, the Flagship. At the bottom of the Aetherochemical Research Facility, Lahabrea and Igeyorhm are unable to defeat the Warrior of Light. Igeyorhm is contained in White Auracite before she can flee, and destroyed with Nidhogg's left eye. The Archbishop and his retinue appear with the sarcophagus of Haldrath, and he explains Nidhogg's right eye was interred with the first Azure Dragoon. He transforms into the primal King Thordan who uses the eye to sustain his power and declares he will become God King. Turning on Lahabrea, he slays the Ascian overlord and consumes his aether. He informs the Warrior of Light that if they "take issue with his godhood, he will answer with his blade."

King Thordan and his Twelve Knights are defeated, ending their reign. When Estinien picks up Nidhogg's eyes the great wyrm's spirit takes control of him and he transforms into the vengeful wyrmking reborn with both eyes intact and ready to resume his war on Ishgard. Compounding matters, the malevolent Illuminati summon the primal Alexander at the abandoned city of Sharlayan. With Minfilia and others still missing, the Scions' troubles are far from over.

Shortly after the defeat of King Thordan during Patch 3.1 As Goes Light, So Goes Darkness, the remaining Scions are joined by Krile, an old friend of Minfilia's, and Alphinaud's former teacher, in the hopes of using her knowledge to find the still-missing Scions. Thanks to her talents, the Scions are reunited with Thancred, when the latter saves them from a confrontation with the Warriors of Darkness. Thancred had emerged from the Lifestream in the Dravanian Forelands, and had been surviving there with the help of the Vath. Though he does not admit it himself, Y'shtola suspects that as a side effect of his time in the Lifestream he has lost the ability to use magic.

While investigating the activities of the Warriors of Darkness, they reunite with Yda Hext and Papalymo Totolymo, who had been working with the Ala Mhigan Resistance, as well as Alisaie, who finally agrees to officially join the group. Though Alphinaud is now the de facto leader of the Scions, he insists that the others consider him as an equal comrade.

Tensions begin to rise at the Gridanian-Gyr Abania border, as the leader of the Ala Mhigan Resistance, known only as the Griffin, is rallying his forces for an attack against Baelsar's Wall. The Scions take part in a meeting with Alliance leaders to decide a course of action. The Griffin proceeds with an assault, and the Warrior of Light, Alphinaud, Alisae, Yda and Papalymo attempt to stop him. They discover, that Griffin used the attack as a false flag operation to make it look like the Alliance assaulted the wall, all so he could force the Alliance to strike against the Garleans occupying Ala Mhigo.

At the top of the Wall, the Scions encounter Griffin, only to discover he is Ilberd. The Warrior fights and defeats him, but as a final gambit, he reveals he is possessing the eyes of Nidhogg. He throws himself down from the wall and commits suicide. His death, combined with his hate and despair and the eyes, causes a summoning of a great primal wyrm, Shinryu. To stop the summoning temporarily, Papalymo sacrifices himself to trap Shinryu in an aetherial orb, buying Scions time to find out how to stop it altogether.

The Scions discuss the matter with the Alliance leaders. With unexpected arrival from Nero tol Scaeva, they find their answer: Omega, an ancient weapon buried in the Cartenau Flats. The Scions, alongside Cid and Nero, head to Cartenau to activate it. Eventually, as Shinryu breaks free, it and Omega engage each other, but the ending of the battle is uncertain, since both Shinryu and Omega disappear. Nevertheless, due to Griffin's actions, the Alliance is forced to launch a campaign to liberate Ala Mhigo from the Empire. The loss of Papalymo also causes Yda to remove her mask and reveal that her real name is Lyse, and she is really Yda Hext's little sister. Real Yda died during the Imperial occupation of Ala Mhigo. The Scions join the Alliance as a special unit.

This section in Final Fantasy XIV: Shadowbringers is empty or needs to be expanded. You can help the Final Fantasy Wiki by expanding it.
Spoilers end here. 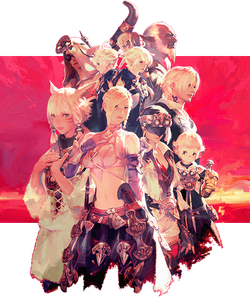 [view · edit · purge]"Scion" is an uncommon English word that means "descendant or heir to a family" and "guardian". The "Seventh Dawn" refers to the end of the Seventh Umbral Era.