Scholars often engage in battle armed with books or grimoires. Typically, a Scholar wears an olive green coat and an academic hat.

The job's primary recurring ability is the Study command, which allows the Scholar to assess the enemy's stats and elemental affinities, functioning similarly to the recurring Libra White Magic. Since their appearance in Final Fantasy XI, Scholars have been revamped to be mages that serve as battle tacticians - gaining access to both White and Black Magic, while providing several abilities to boon the party and damaging their foes with damage over time effects. These two elements would carry over into future installments, such as the 3D remake of Final Fantasy III and Final Fantasy XIV.

The Scholar is a job gained from the Fire Crystal. Using their analytical prowess, scholars are able to analyze an enemy's HP and any existing weakness. They also use the mystical know-how of ancient tomes to damage enemies. Their extensive knowledge allows them to double the effects of items they use.

Scholar (SCH) is a job class which is introduced in the Wings of the Goddess expansion. The Scholar class can cast both white and black magic, similar to the Red Mage job. Scholars have the exclusive ability to change weather conditions around the player, giving them and their allies various advantages for fights. The Grimoire can also be used by those of the Scholar class when they enter battle, and it grants them access to some additional spells.

Scholar (SCH) is a Soul Crystal job. They travel alongside a Fairy familiar which assists them in casting defensive and enhancement based spells. The Scholar has access to the Arcanist's offensive magic attacks, which does give them fairly significant damage capability, but their primary focus is to keep the party safe with various protective and restoring buffs.

Scholar is a job exclusive to nu mou. They use books as weapons and their skills use the knowledge contained in these books for various effects. They are more of a situational job due to the fact that their damage-dealing skills (which have the same power as Illusions) don't discriminate between friend or foe.

Scholar concentrates on weakening the enemy's attack and defense powers. They specialize in wielding books in battle.

Male and female Scholars appear as a job Memoria for players to unlock. The Scholar's have the Study command, which deals double damage to enemies when attacking their elemental weaknesses.

The only series Scholar-like character recruit into the player's party is Harley from Final Fantasy IV: The After Years.

The Scholar appeared as a character card.

Louelle is the first character to make use of the Scholar job. Wielding a tome into battle, she has access to a variety of defensive and offensive magic-oriented abilities. In addition, she can also learn abilities associated with the Rune Knight and Black Mage job.

The Scholar class is available for Chocobo to use. The first few levels of the class give Chocobo abilities that give him information: using Libra to scan an enemy, filling out the map, or identifying any items in Chocobo's inventory. He also gets White Wind, which heals his health and Food meters, and spells that improve the effects of potions or spellbooks. The final ability, Truth, duplicates a random spell for the cost of 1 MP. This spell ranges from weak spells like Libra, all the way to Holy or Meteor.

Harley's job from Final Fantasy IV: The After Years is a Scholar-like class known as a Secretary (秘書, Hisho?). She has the abilities Piercing Sight and Gil Toss. Piercing Sight allows her to give an enemy a new weakness and remove magic effects. Gil Toss does damage by throwing gil at all enemies based on Harley's level.

The Academician (学士, Gakushi?) is Alphinaud Leveilleur's job in the Shadowbringers expansions of Final Fantasy XIV. It is a unique variant of the Scholar job from that game, having Alphinaud summoning Moonstone Carbuncle as his pet instead of a fairy. While it lacks periodic healing, it will cast weak attack magic and can provide damage increasing buffs to party members.

A nu mou as a Scholar from Final Fantasy Tactics A2: Grimoire of the Rift.

Chocobo as a Scholar in Final Fantasy Fables: Chocobo's Dungeon. 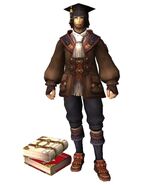 A hume as a Scholar in Final Fantasy XI.

Jusqua as a Scholar in The 4 Heroes of Light.