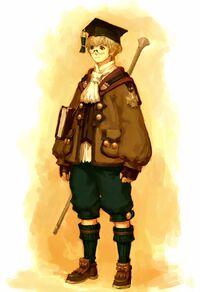 During the Crystal War, these military tacticians often served as high-ranking officers in allied forces across Vana'diel. Extensive knowledge of ancient martial theory granted Scholars the ability to wield dual schools of magic, between which they would alternate depending on the situation at hand.

Scholar is a job introduced in the Wings of the Goddess expansion of Final Fantasy XI. Scholars, like Red Mages, can cast some White Magic, and some Black Magic. Scholars use the Grimoire when they go into battle to grant them access to additional spells. Scholars also enjoy having the exclusive ability to alter the weather around a player, giving them and their allies an advantage through their storm spells. Helix spells are another school of spells exclusive to the Scholar. Helix spells are generally damage over time spells, with effectiveness varying according to the weather and elemental staves equipped.

The quest to become a Scholar is undertaken at the Eldieme Necropolis during the Crystal War. The player must speak with Erline to begin the quest "A Little Knowledge." While signing up, they will asked to retrieve sheets of vellum paper. Upon returning with the fresh paper, they will be tasked with empowering their own Grimoire. Players must use the two-hour abilities Manafont, Chainspell, Astral Flow, or Azure Lore as part of a one-time activation. With their Grimoire, the player now has Scholar unlocked.

White Mage enables the Scholar to take on a supporting role. It provides use of barspells, teleportation magic, and haste, and allows them to use Divine Seal.

Black Mage enables the Scholar to take on a more offensive role. However, its effectiveness is somewhat diminished as many of the benefits are also covered by Red Mage. Black Mage provides increased INT and enables use of Warp, Escape, and Stun spells in the event of a problem, and enables use of Elemental Seal.

Red Mage is the most popular choice of support jobs for Scholar, as it compliments the Scholar's versatility by filling in many of the gaps in their spellbook. This enables some special party capabilities as the Scholar can use Accession to apply Phalanx and Enspells on the entire party. It also enables use Gravity, Convert, and Refresh, though Refresh and Sublimation cannot be used together on the player. Further, it provides Fast Cast, along with up to two tiers of Magic Attack Boost and Magic Defense Boost traits. 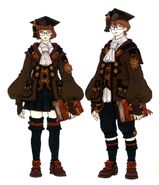