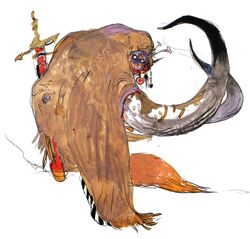 One of Golbez's elemental archfiends, the Blighted Despot, archfiend of earth.

Scarmiglione (スカルミリョーネ, Sukarumiryōne?), also known as Milon, is a recurring character in the Final Fantasy universe. First appearing as a minor antagonist, he is a fiend associated with the element of Earth and the undead. 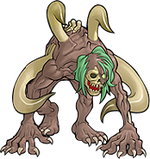 Scarmiglione appears in the Game Boy Advance and PlayStation Portable remakes as a boss in floor 5 of Hellfire Chasm, one of the bonus dungeons for the remakes. As in his original appearance, he is fought twice: once under his cloaked appearance and sequentially, in his true form.

When defeated, he drops a Lunar Curtain.

I am the oarsman who will ferry you beyond the veil! The Blighted Despot, Scarmiglione—Archfiend of earth, and first of Golbez's circle of four!

Scarmiglione (originally called Milon) is a boss and one of Golbez's Archfiends, titled the Blighted Despot. He speaks with a hiss, drawing out the letter s.

Scarmiglione first appears in the Tower of Zot, where Golbez tells him that Cecil Harvey is climbing Mount Ordeals with the intention of becoming a Paladin. Golbez sends him to kill Cecil while he is still is a Dark Knight, because Cecil is powerless against the undead. When he arrives to Mount Ordeals, Scarmiglione makes hissing noises. Porom, a member of Cecil's party, blames them on her twin brother Palom, who denies making them.

The other three fiends, especially Cagnazzo, have a low opinion of Scarmiglione, with Cagnazzo stating Scarmiglione was "a weakling that never deserved to be one of the four fiends."

Scarmiglione mentions that "death brings about [his] true power," which may imply he can only take his true form if he dies.

In the 3D remake Scarmiglione is voiced by Dameon Clarke in English and Konishi Onishi in Japanese.

For battle information, see Scarmiglione (The After Years)

Scarmiglione is a boss. During the battle he begs to be killed before his soul is crushed, and afterwards thanks the party as one of the spirits of the land. If Golbez is in the party, Scarmiglione will thank him for accepting him for what he was despite being hideous and unworthy. The Stardust Rod is awarded after his defeat. 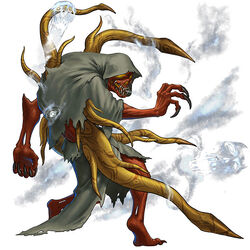 Scarmiglione allows the wielder to use the following abilities: 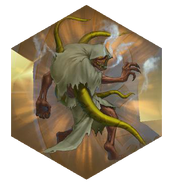 Scarmiglione appears as a summon as a counter to an opponent's summoning, where Scarmiglione resets the opponent's Bravery points back to 0, as its Final Fantasy IV artwork appears. Scarmiglione can be obtained on the second stage of the Shade Impulse I storyline.

Scarmiglione seems to act as a "counter" version of one of the original Final Fantasy Four Fiends, specifically Lich. Lich's Earth Arcana and Scarmiglione's Curse both reduce the opponent to 0 Brave. Lich and Scarmiglione are each the first "fiend" to be fought in their respective games. Plus, they are both undead.

There is also a weapon bearing his name: Scarmiglione's Fang.

In Dissidia 012, he can be purchased from certain Moogle Shops for 100 KP. Scarmiglione also appears as a tutor for the Labyrinth feature at the in-game manuals.

The Blighted Despot, Scarmiglione, is one of Golbez's Archfiends. From what you can see beneath his cowl, he could hardly be described as human, and only those with an unshakeable will would dare face him...

Scarmiglione appears as an enemy.

Scarmiglione appears as an enemy in Battle Music Sequences.

The Final Fantasy IV incarnation of Scarmiglione appears as an enemy.

The Archfiend of Earth is weakest of them all, but wins points for being the scariest.

The Final Fantasy IV incarnation of Scarmiglione appears as an enemy. It is fought in Fabul Waterway. It uses Back Attack and drops the Poison Rod.

Scarmiglione appears as a boss, along with several Revenants. He appears in both forms and counterattacks fire in his second form. He was in several event dungeons and Ultimate battles.

Worry not. It shall be as you wish.

Scarmiglione is a character and summonable vision. His job is listed as Elemental Archfiend.

Scarmiglione's stats at his highest levels are as follows (with no passive abilities taken into account), along with the maximum amount of stat points that can be increased through pot-enhancements:

He can equip the following armors: hats, clothes, light armors and robes. 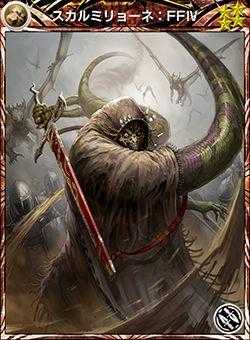 A parody of Scarmiglione from Final Fantasy IV makes an appearance in the 4th chapter of the game along with the other Archfiends. The chapter number they appear in alludes to the number 4, their game's origin. The seasons have been stolen, and by defeating the Four Archfiends will return the seasons. They each have a castle, and are located on the four corners of the map. Sprimiglione (スプリミリョーネ, Supurimiryōne?), the Fiend of Spring is found in the northeast castle.

This Elemental Archfiend rules over death and darkness, and commands his undead legions to end the living.

Scarmiglione, along with Cagnazzo, Rubicante, and Barbariccia, is a promotional card in Guardian Cross. They were special captures to celebrate the release of Final Fantasy IV for the iOS. All of them are Rank 5 (the rarest), with Scarmiglione being a Wisp-type Guardian that would have been found in the Storm Reach region.

Scarmiglione with Golbez and Kain. 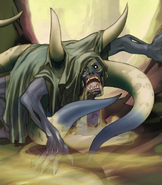 [view · edit · purge]Scarmiglione is a demon in the Inferno of Dante's Divine Comedy. He is one of the 13 Malebranche ("Evil Claws") who guard Bolgia Five of the eighth circle of Hell, Malebolge. Vulgar and quarrelsome, their duty is to force the corrupt politicians to stay under the surface of a boiling lake of pitch.