View info on one enemy.

Scan (みやぶる, Miyaburu?), also known as Sense, Sensor, Gauge, Piercing Sight, Peep, Analyze (しらべる, Shiraberu?), Study, Sense Weakness, or Assess, is a recurring ability in the Final Fantasy series. It is a command ability that exposes the enemies' stats, such as HP, MP, and elemental affinities. It is sometimes associated with the Scholar and Blue Mage jobs.

Scan should not be confused with Libra, which has been translated as "Scan" in early games. The key difference is that Libra is usually a spell while Scan is a command ability, and Scan occasionally has a more potent effect, such as working on all enemies at once or removing an enemy's status buffs similar to Dispel.

The Scholar class's Study ability, which replaces the Scan and Peep abilities from the NES version, reveals the enemy's stats and dispels the enemy's positive statuses. The enemies Xande's Clone and Xande can use the spell against the party.

Cid's ability is Analyze (Peep on the SNES and Study in Anthology) with a Charge Time of 0. In all but the 3D releases, it functions the same as Libra, revealing enemy stats and weaknesses. In the mentioned releases, Analyze affects all enemies at once and continues to display their stats for the duration of the battle.

Analyze is Cid's ability, functioning the same way as it did in the previous game.

Cid and Luca have Analyze, which functions in the same manner as Libra, revealing a single enemy's stats. Analyze has a Charge Time of 0.

Harley's Piercing Sight, too, has a Charge Time of 0. It gives an enemy a random elemental weakness and removes all status enhancements from them.

Blue Mages have Check as their level 1 job ability, which reveals an enemy's HP. Their level 4 ability is Scan/Analyze, which functions identically to Libra.

Sense displays an enemy's current and max HP and MP, which remain in the information window for the rest of the battle. It also shows the enemy's level and weaknesses, but these do not show up after the initial use. Enemies that have 30,000+ max HP cannot be sensed.

The Sense ability is the only ability of the Sense Materia. Red XIII has Sense equipped when he joins, and one can also be found on Sector 6 park in the Midgar Slums after Sector 7's destruction. Sense Materia can also be bought at Junon before the party acquires the Highwind.

Command Materia ability that displays detailed information about the enemies in battle, including stats, elemental weaknesses and resistances, and item drops. Flavor text and information about an enemy's behavior is also displayed, although some enemies do not have flavor text or behavior descriptions when assessed.

When used via a level 1 Materia, Assess only targets one opponent. Upgrading the materia to level 2 allows Assess to scan every enemy present with a single action. Assessing enemies is required for some Battle Intel quests.

Detect is a Skill learned by Zidane from the Mage Masher or Orichalcon for 40 AP. Detect reveals what items the enemy has for steal.

Sensor is an auto-ability that allows the player to view an opponent's current HP, maximum HP, and elemental resistances whenever targeting an enemy. As long as a character with the auto-ability is present in the active party, any character can view the information when using single-target attacks. Sensor can be customized onto a weapon by using two Ability Spheres.

Aeons, Dark Aeons, special monsters in the Monster Arena, and various enemies located in the Omega Ruins, are immune to Sensor.

The Scan ability found in Kimahri's section of the Sphere Grid is more akin to the Libra ability of other games.

View detailed information about one enemy.

Scan shows the details of an enemy. It can be used by the Gun Mage dressphere and Rikku's Machina Maw. Additionally, Scan on the Gun Mage can be upgraded, though it serves merely cosmetic effects; Lv. 2 Scan allows the player to manipulate the target's model, and Lv. 3 Scan allows Scan to target allied units.

Gauge is usable by the Beastmaster, starting at level 10. It has a short recast timer, only 30 seconds. It allows a player to see if they would be able to Charm a particular creature and tells them how likely Charm is to be effective.

Sensor is an A-Ability for human Soldiers. It is learned from the Burglar Sword for 300 AP. When used, it shows concealed equipment, but only to enemy units that have "Item" as a secondary A-Ability.

Soldiers have Gauge, which allows the user to detect level 1 treasure/Loot on an enemy, learned from the Burglar Sword for 150 AP and having a range of 4.

The Scholar's Study, learned for 150 AP from the Battle Folio and having a range of 4, shows a target's treasures, items, and gil.

Analyze is a Sorcerer spell learned from the Grimoire Analyze, dropped by Dragon at the Sanctum's Cleansing Chantry. Analyze reveals the parameters and stats of the target, which can be viewed from the Status menu, and scrolling between the enemies with

The spell costs 5 MP, but casting it does not mean the spell is 100% successful; the hit rate percentage depends on the value of Ashley Riot's Risk, and is calculated below:

Scan is a Story Mode skill. When used on a locked area, it identifies what Battle Piece(s) need to be defeated to unlock that area.

Analyze costs 1 MP and allows the player to see an enemy's level, their amount of HP left as well as elemental and status resistances. By casting it on an enemy and subsequently defeating it, that monster's description will appear as complete on the Bestiary.

Examine is a Miscellany ability learned by Freelancers at job level 1. It displays enemy information, including HP, elemental weakness and family. After have examining a certain enemy, the information can be reviewed by moving the Circle Pad left at any time.

Examine is the job level 1 command ability for the Freelancer. It allows the user to display the enemy's information, including HP, elemental weakness and family. After examining a certain enemy, the player can move the Circle Pad left at any time to view the information again. 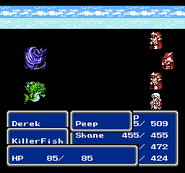 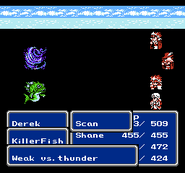 Study in Final Fantasy Tactics A2: Grimoire of the Rift.

Gauge in Final Fantasy Tactics A2: Grimoire of the Rift.

Miyaberu means to see through and expose something. Shiruberu bears a meaning closer to studying and examining something.