When using Satellite Beam, Barret will stretch his arms before aiming his weapon at the foes in front of him. The screen will turn red, as target reticules appear on all enemies. Large, blue laser beams will fire from the air at all enemies.

Satellite Beam is obtained by Barret killing 80 enemies after he has obtained Grenade Bomb. A quick way to do this is in the large forest in the Nibel Area past Mt. Nibel, where approximately 4.4 enemies appear per encounter. It is also the only place where six enemies can be fought in a single wave (Battery Caps). Though Barret's Magic stat is relatively low compared to other characters at this point, Barret can still equip Magic Materia with All, or use Enemy Skill Materia abilities, such as Aqualung, to kill multiple enemies the quickest possible way. If Barret has it, Slash-All can also be used.

Satellite Beam performs one non-elemental attack on all enemies for 2.1875 times Barret's normal damage; this is further amplified as the attack is guaranteed to be a critical hit. Although this deals less damage than Grenade Bomb does against single targets, it is better than Grenade Bomb against waves of enemies, making it Barret's strongest Limit Break against multiple targets at this point. Satellite Beam's damage depends on Barret's physical attack stats, deriving power from his Strength and equipped weapon.

Angermax, as well as Barret's ultimate Limit Break, Catastrophe, both hit enemies randomly, making them unreliable. Nonetheless, their damage potential is much higher than Satellite Beam, and as Barret's damage increases, the trade off makes it worthwhile to use these abilities even against groups. 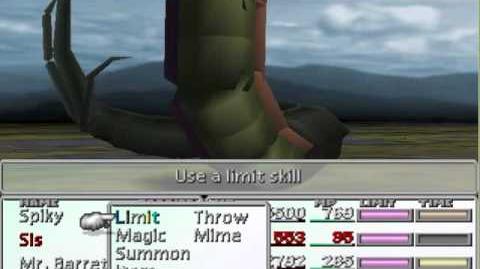