Sasuke, the hero who freed people from a tyrant's reign, wielded blades like these. The ninja himself bore the blood of ancient heroes, and his own descendants bore the daggers for long generations after he passed away.

Sasuke's Blade (サスケのかたな or 佐助の刀, Sasuke no Katana?), also known as Sasuke's Blades, Sasuke's Katana, Sasuke Knife, Sasuke's Kodachi, Ninja Blade, or simply Sasuke, Hardened, or Katana, is a recurring weapon in the Final Fantasy series. It is usually a katana that can be wielded by the Ninja job class.

A small katana used by ninja.

Sasuke's Blade (called Katana is the NES version) is a katana that provides 33 Attack, 35 Accuracy, and 38 Critical . It can only be wielded by the Ninja job class. It can be found in the Flying Fortress and Chaos Shrine (past).

Sasuke's Katana is found only in the Advance port. Only Edge can equip this weapon, and it provides 95 Attack, 49 Accuracy, and +10 Agility and Stamina. This weapon is metallic. It can only be found in the Lunar Ruins.

Sasuke's Katana is accessible via hacking only, and could be used by any of the ninjas. It provides +10 Speed and Stamina as well as 99% Accuracy.

Legendary katana that sometimes blocks attacks. Can be used with Spellblade.

Sasuke's Katana is one of the twelve Sealed Weapons, which provides 99 attack, +1 Speed, and has a 25% chance of blocking attacks.

Blade thought to have belonged to a famous ninja.

The Sasuke (known as Hardened in the SNES version) is a weapon available to Shadow. It has an attack power of 112 and is Wind-elemental, it also enables the Runic command.

In the Floating Continent, the Sasuke can be retrieved when the party encounters a Monster-in-a-box; fight Gigantos in order to acquire it, it can be stolen from Baalzephon.

Sasuke is also one of the weapons thrown by the Outsider, which deals moderate non-elemental damage to one target.

The Sasuke Katana is the base version of the Ninja's mythic weapon (Nagi), found within Nyzul Isle. It can be used to obtain the Weapon skill Blade: Kamu.

Sasuke's Blades are the Zodiac Weapons for

Ninjas. They are acquired via the quest

His Dark Materia, by combining reagents acquired from assorted other side quests with a materia created from the Yoshimitsu Nexus, the final stage of the ninja's Relic Weapon. Sasuke's Blades can then be upgraded to Sasuke's Blades Zeta, the most powerful ninja weapons in A Realm Reborn.

Sasuke's Blades' secondary stats are determined by what the player chose to imbue in their Yoshimitsu Novus, and can be redone by acquiring and imbuing a new Sphere Scroll: Yoshimitsu from Hubairtin in Central Thanalan and presenting it to Jalzahn Daemir in the North Shroud.

Sasuke's Blade (known as Sasuke Knife in the PlayStation version) is a ninja sword that provides 14 Attack. In the normal single player mode, it can be stolen in a sidequest involving Agrias in the War of the Lions remake. In the PS version, Sasuke's Blade can be obtained by using the Move/Find Item ability on a character with low Brave on the Nelveska Temple stage, which is a one time battle in an optional sidequest. It can also be obtained via Rendezvous.

Sasuke's Blade is an artifact that increases Strength by 3.

The Sasuke's Kodachi has an attack of 8 and magic attack of 4. It can inflict Confuse and Poison upon attacking. It can only be bought from the multiplayer shop in Spelvia for 4,680 pts.

Sasuke's Blade is a ninja sword. It provides 87 attack.

Sasuke is a level 30 parrying armor that provides +2 Attack, +36 Defense, and +3% Bravery Boost on Block. It can be obtained by trading 58,220 gil, a Shinobi-Gatana, and a Skull Knight Shard.

One of the twelve shining arms, and the beloved katana of the legendary ninja, Sasuke's Katana. Sasuke's Katana was prehensile and could use both hands with deadly efficiency, which allowed him to use a weapon in each hand to fell many powerful enemies in battle. This particular katana holds the very soul of Sasuke's Katana, and those who hold it are imparted with some of the skills that Sasuke's Katana exhibited. Only those who have shown their might to The Starving Wicked Beast, Aldhafera, can wield this weapon.

Sasuke's Katana is a Katana obtained by defeating Aldhafera in the Chamber of Arms. It provides 130 ATK and enables Dual Wield.

The weapon of a techno-ninja. 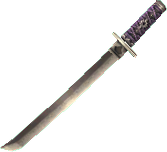 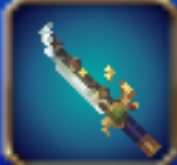 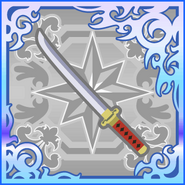 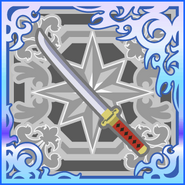 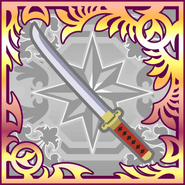 [view · edit · purge]Sarutobi Sasuke is a famous fictional Japanese ninja and is considered a pop culture icon along with Hattori Hanzō and Fūma Kotarō. Unlike Hanzō and Kotarō who did exist in the history of Japan, Sasuke is totally fictional.