Sarutabaruta is a region of southern Mindartia in Final Fantasy XI. It contains the areas immediately neighboring the Federation of Windurst. The vast subterranean waters of these steppes provide lush vegetation and abundant wildlife for the city. Though the Tarutaru have inhabited Sarutabaruta for many centuries, the mysterious ruins dotting the landscape predate their arrival. During the Crystal War this region was incorporated into the Sarutabaruta Front.

This region is subject to Conquest. Due to its proximity, it's extremely rare for the Federation of Windurst to lose control of this region. 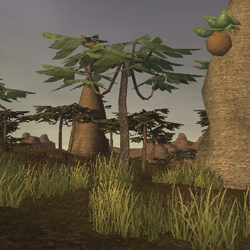 West Sarutabaruta forms the southwest corner of Mindartia. It connects to both Port Windurst and Windurst Waters. These plains feature the Starfall Hillock, a location famous for meteorites and a rare dew that forms there overnight. The region's outpost is located in this zone.

A Cavernous Maw connects West Sarutabaruta to the time of the Crystal War twenty years in the past. 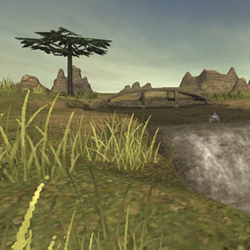 East Sarutabaruta consists of the savanna lying immediately outside Windurst Woods. It includes two rivers, the Nompipi and the Zanbibi, and Tepokalipuka Lake. The grassland gives way to Tahrongi Canyon in the northeast.

Giddeus is a primitive Yagudo city that occupies the westernmost portion of Sarutabaruta. It is a place of religious significance to the Yagudo people and many of its residents engage in theological pursuits. The springs in Giddeus contain water with peculiar properties that make it useful for Windurstian scientists.

Balga's Dais is the heart of Giddeus. It features a Burning Circle and therefore is the gateway to a variety of violent encounters.

The Toraimarai Canal is a dangerous labyrinth of waterways underneath the city of Windurst. It is normally forbidden for anyone to enter and is therefore swarming with unpleasant creatures that no one has bothered to exterminate. The western half of the canal connects to the Rose Tower of the Horutoto Ruins while the eastern half leads to a restricted gate in Windurst Walls. Toraimarai was the location of an important laboratory during the Crystal War.

The Full Moon Fountain is an ancient receptacle for the power of the moon and the stars. It is hidden deep within the Toraimarai Canal. It is reputed to be the location where the first Star Sibyl gained her powers and only successive Star Sibyls are permitted to enter. Windurst's guardian, the Great Beast Fenrir, resides in the Fountain.

The Rose Tower contains the Three Mage Gate, a door which normally opens only if a black mage, red mage, and white mage stand before it simultaneously. Savvy Windurstians can obtain a Portal Charm that enables passage for anyone. The Toraimarai Canal lies beyond the gate in either case.

The eponymous theme "Sarutabaruta" plays in both West and East Sarutabaruta.

Sarutabaruta appears as the Field Music Sequence for its eponymous theme.

Sarutabaruta appears in the FMS for its eponymous theme.