The Saronia Catacombs are an optional dungeon accessible from underwater to the southeast of Saronia. The party can fight Odin here in order obtain the Summon spell Catastro, and steal the Gungnir from him, as well pick up some equipment and items from chests. In a side room off of the second to last room, there are eight chests with four Elixirs and four Phoenix Downs but there are monsters guarding the items.

An area visible on the screen with Odin has two chests. These chests are accessed from a hidden passage in Saronia Castle (a room with Black Mages).

The background music that plays inside the Saronia Catacombs is called "Sunken Temple". 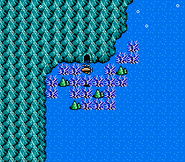 Saronia Catacombs on the World Map.

[view · edit · purge]Catacombs are human-made subterranean passageways for religious practice. Any chamber used as a burial place is a catacomb, although the word is most commonly associated with the Roman Empire. Many are under cities and have been popularized by stories of their use as war refuges, smugglers' hideouts, or meeting places for cults.