Saronia is a sprawling kingdom in Final Fantasy III. The city has four sections, with the castle at the north end. The party meets Prince Alus here.

After being mind-controlled by Gigametz, King Gorn causes the Saronia Civil War by splitting his army in half and ordering them to fight each other. He also exiles his son, Prince Alus Restor, from the castle, and imposes a curfew that shuts down all businesses except for one weapon shop in the northeast that operates secretly.

When the Warriors of the Light fly over Saronia in the Enterprise, the Saronian military shoots them down, trapping them within the city walls. They save Alus from some thugs in a pub in the southwest area and he joins them to try and stop the civil war and figure out what caused King Gorn to start it.

They go to the castle to speak with the King and Alus is released from his exile; they are subsequently invited to be guests. During the night, Gorn enters the bedchamber to attack Alus, but turns the knife on himself at the last second. Gigametz's mind control is revealed; it was broken by the order to kill Alus. Gigametz transforms into Garuda, but the party defeats him.

King Gorn's wound is mortal, but he is able to reconcile with Alus before his death. Alus is crowned as the new king and the war ends, returning life in Saronia to normal. In thanks, Alus gifts the party with the airship Nautilus.

Northwestern Saronia is home to the Great Library of Saronia, which contains some interesting background information on the game. There is also an inn and a magic shop, though the player cannot enter the latter until completing plot events in the castle. This is also where the player first finds the Legendary Smith.

Northeastern Saronia has an inn, two weapon shops, and two magic shops. The smaller weapon shop in the northwest section is the only non-item shop open in all of Saronia when the party first arrives.

Located in the northwestern corner:

Located in the northeastern corner:

Southwestern Saronia has an armor shop, the tavern where the party eventually meets Prince Alus, and a chocobo researcher's house, where the Fat Chocobo can be summoned to hold items and the player can find eleven Gysahl Greens in a secret room. Speaking to the two old men with Alus in the party the player is awarded with a Wind Spear and a Dragon Mail.

Southeastern Saronia is home to the Dragon Spire, an optional area that contains equipment for Dragoons at the top, as well as two Phoenix Downs.

"Salonia" or "Saronia" (巨大都市サロニア, Kyodai Toshi Saronia?, lit. Megacity Saronia) is the background music for most of the areas of Saronia. After the defeat of Garuda, the background music of the town areas changes to "Return of the Warriors". "Saronia" also appears in the Final Fantasy XV music player on the Memories of FFIII album bought from Coernix Station - Alstor for 100 gil.

One of the original servers was named Saronia. It was merged into the Sargatanas server along with the Lindblum server.

Saronia Castle appears in the background during the Field Music Sequence of "Eternal Wind".

In Final Fantasy Tactics, Saronia is mentioned in the description of the Artefacts, Black Materia, White Materia, Red Materia, and Blue Materia. It was an ancient magical city whose residents, the Saronians, depended on the power of these materia for magic.

Unused dialogue for Alus in the Final Fantasy III 3D remake gives backstory on the reverence of Dragoons, where a knight defended Saronia from a giant bird. The story also serves as an allusion to Garuda.[1]

Unused dialogue for the Northwestern region of Saronia has Alus note that the district is home to academics, engineers, lawyers and politicians and that it has been the preferred residence for those who play a key role in the Saronia Royal Family for generations. [2]

Saronia as seen on the world map (NES). 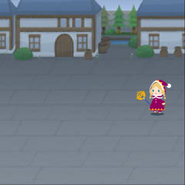 There is a Saronic Gulf, part of the Aegean Sea, off the coast of Greece. The area around the gulf is sometimes referred to as Saronia, as in the historical novel Saronia: A Romance of Ancient Ephesus by Richard Short. There was a festival of Artemis Saronia to celebrate Artemis in Trozeinos, a town in Argolis. A king named Saron built a sanctuary for the goddess after she saved his life when he went hunting and was swept away by a wave.