Sarah, a divine young woman whose past is shrouded in mystery, was taken prisoner by the Empire aboard their most secure airship for reasons unknown. Though naturally quiet in nature, her grace and poise suggest that she may be more than she appears...

Sarah, also called Lassah, is a playable character from Final Fantasy Dimensions. She is a princess from the Kingdom of Burtgang who has been taken captive by an imperial airship before being saved by Nacht and the twins Dusk and Alba. She ended up becoming one of the four Warriors of Light chosen by the crystal of Lux.

A princess called Sarah is a recurring element in the Final Fantasy series.

Sarah has green eyes (blue in the sprite) and long wavy blue hair. She wears a yellow shawl over a white robe with baggy sleeves, green bodice and purple trim, held by a thick black and silver belt. The robe is split up the front to reveal white trousers, black shin guards and silver sandals. The primary color of her various job outfits is orange, and green being her secondary color.

Sarah is quiet by nature and does not speak of her past, instead behaving with caution and reserve around others. However, her caring and gentle nature is noted early on when Dusk says she is the best person to approach a sick wyvern, and the Unicorn Eidolon says she is pure of heart and benevolent. She is always affected by the suffering caused by the Avalonian Empire, appearing sad or trembling when the party encounters some new atrocity.

Despite her reserve, Sarah is never hesitant to fight or protect others. She is quick to intervene when someone else is in danger. After the party's travels to Burtgang, Sarah becomes more vocal in her determination to stop the Avalonian Empire, both to avenge her family and for the sake of restoring peace to the world.

Sarah is the youngest daughter of the King of Burtgang. As a young girl, she was evacuated from the castle when a ninja clan sent by the Avalonian Empire attacked the royal family in an act of treachery. She grew up in hiding under the alias Lassah with the former knight commander acting as her father. After the commander died, she returned to Burtgang where Cid of the Avalonian Empire arrested her and brought her to Harmonia. She met Nacht and the twins Dusk and Alba, whom she was forced to work with to steal the Crystal of Lux.

When they reach the Crystal Temple, the Crystal shatters, dividing the world between light and dark with Sarah made into one of the four Warriors of Light. Though Sol distrusts her at first, her story of Burtgang being betrayed makes him consider the possibility that the Avalonian Empire is untrustworthy before finding it out for himself. The warriors are joined by a red mage named Elgo who explains what has happened. The group attempts to steal an Imperial airship, but Baugauven attacks them and Elgo sacrifices himself to protect the Warriors. The Wyverns of Deist attack, causing the airship to crash.

On their way to Deist, Barbara attacks the party to scare them off, but they proceed to town and learn about how the Empire betrayed the Dragoons, leaving only Ricard. They learn of the Empire's new plot to poison the wyverns and search for Dragon Grass to save them.

After saving the wyverns, the Warriors of Light move on to Capo and defeat Bikke to gain passage to Rusalka, where Imperial soldiers are hiding in the mountains. The party finds a singing frog who flees from them, so Sarah turns the party into frogs so they can communicate with it. The frog is Eduardo, a local bard who went missing. He was cursed to be a frog by a sea witch when he sought her help in finding a mermaid. The group accompanies Eduardo in his search and discover that the "witch" is Styx, one of the Four Generals. They defeat her and free the mermaid, who turns out to be Eduardo's mother. The curse on mother and son is lifted, and the Warriors of Light gain the Bard job.

Aboard Bikke's ship, the party spots an Imperial airship and decides to follow it until they reach Mathel. When the party reaches Ashmonte, they discover a fallen robot in the forest. Not knowing that it is Argy, an intended Imperial weapon, Sol and Sarah decide to bring her with them. Argy begins to refer to them both as her mother and father. Sarah grows attached to her and teaches Argy about flowers. In the factory town of Fabrica, they investigate rumors that the Empire is working on a powerful new ship. They find the new ship, Heliogabalus, under construction. Deep within the ship they find Dr. Lugae, who addresses Argy as his daughter, along with Cid, an Imperial general. Cid reprograms Argy to attack, but the memories she created with Sarah and Sol allow her to defy his will. In response, Cid unleashes several new prototypes against them. Argy takes the brunt of their attacks and is left broken after the battle. In gratitude, Argy grants them the abilities of the Memorist.

Although the situation looks grim, Lugae is able to help them escape the collapsing ship and they reach the port town of Berth. There, Sarah reunites with the Knight Commander of Burtgang, Gawain, for the first time since the kingdom's fall. Gawain's descent into alcoholism renders him unable to recognize her initially, and he makes a crude pass at her before recognizing her blue hair. Sarah is visibly shaken and upset by this encounter. The party follows him to his hut on Mt. Wells, where Sarah confronts a now-sober Gawain. He apologizes for the death of her family, blaming himself for not realizing the trap until it was too late, and tells her that her safety is more important to him than anything. Afterwards, Sarah departs alone to see the ruins of her family's old kingdom. She reminisces about the commander who took her from the castle to live in hiding as commoners, renaming her "Lassah" and treating her as a daughter.

When she arrives at the castle, several imperial soldiers ambush her, but Gawain appears to join her in battle as she thought he might. Sarah's determination persuaded him to take up the fight once more. Sarah voices her desire to free their homeland from the Empire, repeating her adoptive father's words that Burtgang will always be alive so long as they are, and that both Burtgang's dead and the oppressed citizens who survive must be avenged.

Styx awaits them in the throne room, posing as Sarah's deceased mother. Sarah sees through the illusion and the party defeats her in battle. Immediately, Shango appears and executes Styx for her failure. Gawain, realizing that Shango is too powerful for them, gives Sarah his sword and engages him alone. When the sword grants the party the abilities of the Paladin, they assume the worst.

After leaving Burtgang, Dusk finally reveals that he is an agent of Mysidia and leads the party there to meet its elder, Sophia. They are interrupted when the Heliogabalus, now repaired, attacks the town and the Warriors of Light board the ship again to destroy it for good. Among its defenses are the Argy-2 robots. Sarah tries to talk them down to no avail, but Argy speaks through the Whisperweed and convinces them to stop fighting. After this, the party reaches the engine room and engage in a short battle with Shango before the ship begins to explode. They find Cid's escape vessel, with the Argy-2's still refusing to attack, but it fails to start and they flee to the main ship's deck. Vata appears and suggests that they use the Dragoon's Jump to escape to Lugae's ship alongside. Sarah fails to make a secure landing and plunges from the deck, but Barbara swoops in on a wyvern and saves her. With the battle over, the party returns to Mysidia where Sophia brings them to unseal the Holy spell and grant them the Seer job.

Just as Shango appears again, the Warriors of Darkness in the other world unseal Meteo, triggering another Dimensional Shift. This reunites the Light and Dark halves of the world, but rather than restoring it, it sweeps most of the world's population into another dimension and leaves a barren World of Dusk.

Sarah has no starting abilities, but has high magical stats, which may be advantageous for spellcasting jobs. She has decent growth in Speed and HP, which may also be helpful for jobs like Red Mage, Thief, Bard and Paladin. However, since the stat differences between characters are minimal, and abilities and equipment are of greater importance, she can competently do any job. Jobs also gain stats boosts when they level up, which helps even out stats. She joins with a whip, bronze shield, feathered cap, and bronze hauberk. 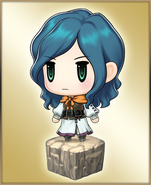 Sarah appears on a card depicting her official artwork.

Sarah with Nacht and the twins.

Sarah with Sol and Argy.

Sarah as a Bard.

Sarah is named after a recurring support character, Princess Sarah. [view · edit · purge]The name Sarah, (שָׂרָה in Hebrew) is the Hebrew name for "princess", or a woman of high rank.