Men are so obtuse... Must I say it plainly? I want to stay with you a bit longer! There!

Lady Sara Altney is the princess of Sasune from Final Fantasy III, and the party's first guest character. She is met and recruited in the Sealed Cave. In the 3D remake, she has feelings toward Ingus. Though it is spelled differently, Sara continues the Final Fantasy tradition of supporting female characters named Princess Sarah.

Sara has blue eyes and long strawberry blonde hair pinned back with a headdress and other hair ornaments. She wears a blue bustier that shows her midriff with a long purple-and-white cape and high collar. Her sleeves are detached and she wears dark fingerless gloves. She has an elaborate belt and wears blue-and-yellow trousers that are wide enough to appear as a skirt. She wears plain brown slippers.

In initial screenshots of the Nintendo DS version of Final Fantasy III, Sara's model had a different appearance from the final version.

Sara is brave and determined. She sets out to seal the Djinn herself when he curses the kingdom. Although she is intimidated when she reaches his cave, she is undeterred and readily joins the party when they arrive to "rescue" her. She decides to stay in Castle Sasune when they set out on their quest, not wanting to get in their way, but she doesn't hesitate to help them again when they are caught in a trap at Syrcus Tower. She is cheerful and friendly while traveling with the others and doesn't mind Luneth's lack of formality.

She has feelings for Ingus, which she makes clear even though he is less effusive with his own.

Sara joins the party after they travel into the Sealed Cave to find her, assuming that the Djinn had kidnapped the princess for her Mythril Ring. However, Sara left of her own volition to break his curse. Her first attempt to seal the Djinn with the Mythril Ring fails, so the party must weaken him in battle before it works. After the Djinn is killed, she throws her ring into the spring in the castle basement, dispelling the curse and remaining in Castle Sasune while the party continues with their adventure.

The 3D remake adds a Mognet sidequest. Sara writes to Ingus throughout the game, and her final letter is a request to fix her broken pendant, which leads the party to meet the Legendary Smith.

Whenever the party meets Sara, she shows interest in Ingus. While he has sworn to protect her, he returns the interest. When Doga asks Sara to help break the Curse of the five wyrms, she joins him once she finds out Ingus is in trouble. After breaking the curse, she stays behind with the others while the party enters the World of Darkness.

When the Cloud of Darkness is defeated, Sara decides to stay with Ingus for a while, before returning to the castle.

In the 3D versions, she aids the party by casting Cure on its members and Aero against monsters. As Cure and Aero are both White Magic spells, it is likely Lady Sara is supposed to be a White Mage character, like Aria Benett.

Sara is an ally and a summonable Legend. Her EX ability is Aero. 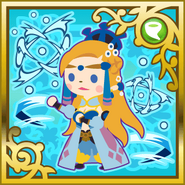 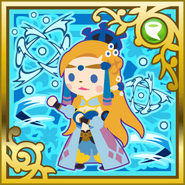 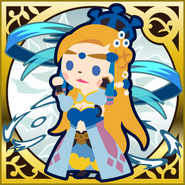 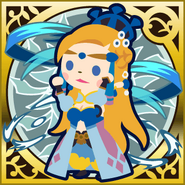 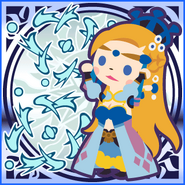 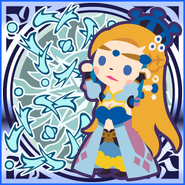 I will not yet return to the castle! I wish to adventure with you a little longer!

Sara appears as a character and summonable vision. Her job is listed as Princess.

Sara's stats at her highest levels are as follows (with no passive abilities taken into account), along with the maximum amount of stat points that can be increased through pot-enhancements:

She can equip the following armors: hats, clothes and robes.

Sara appears on a card depicting her Yoshitaka Amano artwork.

In the Dawn of Souls and all subsequent versions of the original Final Fantasy, Sara is referenced as one of the names the player can choose for the White Mage job. 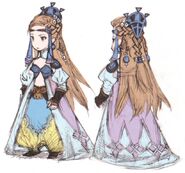 Concept art of Princess Sara for the DS version by Akihiko Yoshida.

Early model on right with final on left.

Sara in the manga.

[view · edit · purge]The name Sarah, (שָׂרָה in Hebrew) is the Hebrew name for "princess", or a woman of high rank. Her name alludes to Princess Sarah from the original Final Fantasy.