Sapphire Weapon (サファイアウェポン, Safaia Wepon?) is one of the seven Weapons created by the Planet, and one of the five in Final Fantasy VII roused to protect the world following Meteor's summoning. It seems to be aquatic and can shoot a laser from its mouth. It is the only Weapon that cannot be fought by the party.

After Meteor is summoned and Tifa awakes in Junon, Heidegger reports to Rufus that a Weapon is approaching from the sea. When Sapphire Weapon reaches the shore, it surfaces from the water and rears its head in front of the city, only to have it blown off by the Mako Cannon.

There is a large crater on the Bottom of the Sea approximately where the Sapphire Weapon fell. That is where Emerald Weapon sometimes hovers after the party acquires the submarine.

The designs of the Weapons in Final Fantasy VII are highly reminiscent of mecha from the Gundam franchise; the Sapphire Weapon resembles the ZMT-A31S Doggorla.

Sapphire Weapon is a Garlean superweapon mentioned in Patch 5.2 and introduced in Patch 5.3, developed by the lingering remnants of the VIIth Imperial Legion from reverse engineering the Ultima Weapon and incorporating both an aquatic Primal and the data of Regula Van Hydrus into its mainframe. 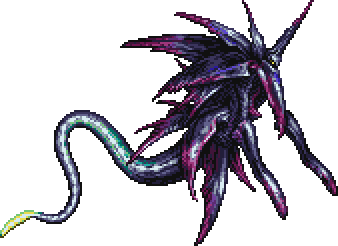 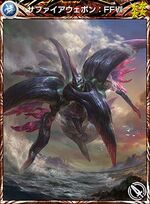 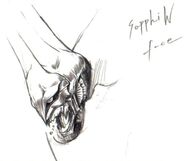 [view · edit · purge]Sapphire is a gemstone variety of the mineral corundum, an aluminium oxide. It is the birthstone for September.