Sap (スリップ, Surippu?, lit. Slip), also known as Seizure, and Slip, is a recurring status ailment in the series. Sap works similar to Poison, except that it usually does not stay after battle and lowers HP at a much faster rate, but in smaller amounts.

A monster inflicted with Sap will rapidly lose 2 HP at a time until the effect wears off. Haste causes Sap to wear off more quickly and reducing the total damage it causes, while Slow prolongs it. However, it can be cured with Dispel and it automatically wears off after combat. In the 3D versions, Sap cannot be dispelled, and it constantly drains HP at a higher rate.

Sap is caused by Bio, Bile, Big Bang, Bloodfeast, Pollen, and Mindflayer's Mind Blast attack. Holy can also inflict the status, although the monster must be weak to Holy in order for Sap to take effect.

The Sap status returns as a status effect in the sequel of Final Fantasy IV, and it functions the same way as its predecessor.

Sap decreases HP continuously, and can be inflicted by the Black Magic Bio and some Blue Magic, such as Mind Blast and the Dark Art Meltdown. The Thornlet also inflicts this status to the wearer, as does the mix Failure. Of note, unlike most other statuses that have timers on them, Sap will continue to act on a character even if they are stopped or if a party member casts Quick.

Sap, also known as Seizure and formerly known as Slip, can be inflicted by various moves used by enemies and party members. The Thornlet helmet also inflicts this status to the wearer. The amount of damage it does is the same as Poison, but does not multiply over time. Targets under Seizure will lose HP every 8.5 seconds, to a maximum of 255 each time. If a character has immunity to Sap, they also gain immunity to Regen, and vice versa, and the other status can never be applied during battle. The Sap status can be cured by the Poisona spell.

Some undead enemies are afflicted with the Sap status naturally, but the status was originally meant to heal the undead and thus work like Regen. It does not work because of a bug in the "invert damage if undead" attack property. As a result, a few attacks and statuses do not work correctly and Sap hurts both the undead and the living.

The Sap status decreases the attacker's hit rate on the affected by 25% apart from the game versions affected by the Evade bug.

Seizure can only be inflicted by Bottomswell's Waterball attack, which places Seizure and Imprisoned status on a character (despite the status screen saying it places Death and Imprisoned). The victim can be cured by casting magic on the Waterball to defeat it.

Each element has an ability that lowers a stat and causes HP to be lost at a minor rate:

Sap decreases the afflicted's HP at a fixed rate of 10 HP/second, unlike the Poison status. It is inflicted by the abilities Bleed, Bio and Scourge, by the Chopper or Blood Sword weapons, and by equipping the Ensanguined Shield. It can be cured by using the abilities Regen and Esuna, and the item Remedy with the Remedy Lore 1 augment. The Quasimodo Boots make the wearer immune to Sap, and in the Zodiac versions, Tourmaline Ring also has this effect.

Inflicting enemies with Sap is fairly pointless as the health drain does not scale with HP (like Poison does in Final Fantasy XIII); dealing damage in any other way is superior to 10 HP/s.

Sap can be used to counter the Regen status effect. Accessories with the Regen effect do not provide immunity, but both statuses active simultaneously causes no overall change in HP totals. Unlike the past games, Sap only reduces the victim's HP to 1. Some special enemy attacks that inflict Sap, however, can inflict KO if not treated. Sap is unaffected by Reverse.

In the Zodiac versions, the Sap status can be inflicted upon one enemy using the offensive item Meteorite (A) and the new mace weapon, Bonebreaker. The Tourmaline Ring accessory now makes the user immune to both Poison and Sap.

The Sap status will steadily decrease the HP of the afflicted character in small amounts. Much like Final Fantasy IV and Final Fantasy V, there is no visual image for this affliction. Only the HP of character(s) will go down. 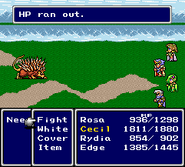 Effects of Sap on a target when it kills them in Final Fantasy IV (SNES).

Effects of Sap on a target when it kills them in Final Fantasy IV (GBA).

Effects of Sap on a target when it kills them in Final Fantasy IV: The After Years (Wii).

Effects of Sap on a target when it kills them in Final Fantasy IV: The After Years (PSP).