Sap (アンチ, Anchi?, lit. Anti), also known as ANTI, Anti, Faze, and Invert, is a recurring ability in the series.

Sap is a White Magic spell which reduces MP from one or all enemies. The spell's potency increases with its level, reducing MP to 1 divided by the spell's level. For instance, it will reduce MP to 1/2 at level 1, 1/3 MP at level 2, and so on to 1/17 at level 16. Any character can learn Sap by having them use the Sap Tome (Faze Scroll in Final Fantasy Origins).

In the NES version, the spell is bugged in that it only acts on the least significant byte of the target's MP, so targets with 256 or more MP are not affected correctly. In all versions, being hit with Sap will raise an character's MP and Magic at a significantly higher rate than merely casting spells.

Invert is an enemy ability used by Braegh, Piscodaemon, Mindflayer, Shadowseer, Cúchulainn, Hell Wyrm, and Larva Eater. It switches the target's remaining HP with their MP at the cost of 5 MP, potentially being able to kill the target if their MP is at 0. It only affects one target within a range of 10, has a CT of 3, 100% accuracy, is Magickal, and can be Reflected. 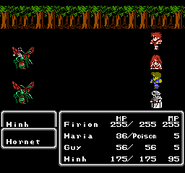 Sap cast on all enemies in Final Fantasy II (GBA).

Sap cast on the party in Final Fantasy II (PSP).