Detects by Sound
List of Sandworm Enemies
For years the sandworm has held a place in Galkan folklore; the enormous worms were said to lurk in the deserts of the underworld, scavenging upon the interred bodies of the dead. Thought for a long time to be nothing more than a fictitious beast, proof of their existence came as a shock during the Great War when they were observed on numerous occasions, burrowing up onto the field of battle to swallow unsuspecting soldiers.

The original sandworm has been spotted in a number of areas, but thus far has not yielded any notable treasures on its own. It can, however, teleport whole parties into battlefield fights, which can yield amazing rewards. 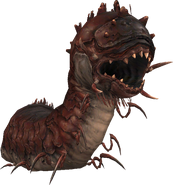