Where is the early bird when you need him?

The Sand Worm is an enemy from Final Fantasy X located in the Sanubia Desert and Cactuar Village, on Bikanel Island. Although intimidating, it is not a difficult enemy to defeat.

Enemy is Tough.
Becomes immune to Sleep and Bribe while Readying Quake.

Sand Worms will use physical attacks before preparing to use Earthquake, an attack that will hit all party members after a turn of charging and delay their turns. They will not use Earthquake against aeons, and if Valefor is summoned while charging, the attack will miss. Hellfire and Thor's Hammer have alternate animations when used against Sand Worms.

After being targeted ten times, the Sand Worm will use Swallow, which temporarily removes a party member from the battle. This is followed by Regurgitate after being targeted five more times, which will deal damage and heavily delay the regurgitated character's next turn, but allow them to be used again. The turn counter will not increase while Readying Quake or when targeted by aeons, characters not under Poison or Zombie, or characters using Self-Destruct or Doublecast. While a party member is swallowed, the Sand Worm will stop attacking characters, but not aeons. Ending the battle after a character has been Swallowed and before they have been Regurgitated will result in 0 AP being awarded to that character, as if they were ejected.

The Sand Worm drops some particularly useful armor with Auto Potion and/or HP +10% as well as several empty slots. The weapons that it drops are not as useful, with Magic +5%, Strength +5%, Slowtouch, and/or Piercing.

The easiest way to defeat the Sand Worm is to use Auron's Overdrive: Shooting Star. Completing the button combo will always kill the worm.

If Auron's Overdrive is unavailable, inflicting Darkness status and using a barrage of physical and magical attacks works best. Poisoning it via Bio will cause the Sand Worm to lose several thousand HP every turn. Having Rikku use Shadow Gems (which can be stolen from them) will also cause a lot of damage. 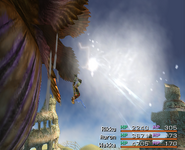 Swallow.
Add a photo to this gallery

Retrieved from "https://finalfantasy.fandom.com/wiki/Sand_Worm_(Final_Fantasy_X)?oldid=3363863"
Community content is available under CC-BY-SA unless otherwise noted.