Cocoon
The Sanctum Skyfleet in Final Fantasy XIII is the aerial power and force of the Sanctum. It consists of multiple divisions. The Cavalry is the most autonomous division, working mainly alone on the outskirts of Cocoon dispatching monsters.

The Cavalry has no fixed base, and instead, use their airship, the Lindblum, for their base of operations. The other divisions of the Skyfleet appear to work with PSICOM. The Skyfleet's largest airship, the Palamecia, is used to transport the Primarch.

Sanctum's Skyfleet special division, known as the Cavalry, along with their airship Lindblum, participate in action of finding people who survived the Purge and the l'Cie. Eventually they find Snow trying to break Serah's crystallized body out of the ground. Snow in his desperation summons the Shiva Sisters and is weakened by them.

The Cavalry takes Snow captive with the help of Oerba Yun Fang. The rest of the Sanctum forces almost catch up with the other l'Cie, but despite their pursuit, the l'Cie manage to escape on an airship, although the Sanctum manages to hit the l'Cie's airship causing it to crash land on the Vile Peaks.

The l'Cie are cornered at the Estheim residence in Palumpolum and are attacked by the Havoc Skytank. The l'Cie defeat it, and are met by the Cavalry, who take them onboard their airship the Lindblum. It is revealed the Cavalry is plotting against the Sanctum and wants to help the l'Cie in overthrowing the fal'Cie-led government.

At the beginning of Chapter Nine, party consisting of Lightning, Snow, Hope and Fang, plans to rescue the captured Vanille and Sazh who are imprisoned on Palamecia. With the Cavalry's help, the party board the Sanctum Skyfleet's flagship, the Palamecia.

After long trip across the Palamecia, Lightning, Snow, Hope and Fang reunite with Vanille and Sazh and head to the Bridge to talk with Dysley. The l'Cie discover Dysley is really the fal'Cie Barthandelus and are forced to fight him.

After defeating Dysley his Rukh, Menrva, transforms into an airship, which leads them to the Fifth Ark. 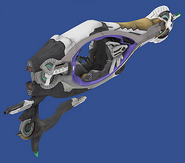 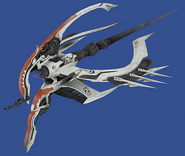