Sanctuary Keeper is a boss in Final Fantasy X fought at the summit of Mt. Gagazet. It is a hulking Sacred Beast fiend sent by Yunalesca to challenge the summoners and their guardians before they enter Zanarkand.

A palette swap of it appears in the Original section of the Monster Arena as Th'uban, who uses similar attacks.

Sanctuary Keeper opens with Photon Wings, which damages the party and inflicts Curse, and may inflict Darkness, Silence, Sleep, and Confusion. It then uses two physical attacks, the former attacking the party member with the highest HP, before following up with Mana Breath, inflicting heavy magical damage to one party member.

The next two turns are decision-based; when over 50% HP, it will cast Protect if afflicted with Armor Break; Esuna if afflicted with Darkness or Poison; or Curaga, restoring a large amount of HP. If below 50% HP and it has Reflect, it will cast Reflect on the party member with the lowest HP and bounce its spells off them. Otherwise, it will follow the same pattern as before, but will cast Regen before Curaga. This updated attack pattern will remain, even if its HP goes above 50%.

After being attacked three times, Sanctuary Keeper has a 20% chance to counter with Tail Sweep, which delays the party's turns heavily and removes Haste. The chances of it countering increases by 20% with each attack, until it's guaranteed to counter with the seventh attack.

If afflicted with Slow, Sanctuary Keeper counters by casting Haste, but if it has Reflect, the spell will bounce onto the player party. If a party member has Reflect, however, it will target them. If Slow was inflicted with a Counterattack weapon, it will use Haste the next time it is damaged.

Even with a weak party, fighting the Sanctuary Keeper is easy as long as they have Dispel and Bio/Poison Fang. After starting the battle with either, the party can bestow Reflect on Sanctuary Keeper, which makes it less likely to cast Curaga.

Auron should use Power, Armor and Magic Break, then use physical attacks while Yuna heals. Sanctuary Keeper's Photon Wings inflicts various status ailments, but a Remedy heals Darkness and Poison, and a Holy Water lifts Curse. Auron and Yuna are the most helpful party members, though Lulu can contribute by casting Bio and Rikku can use items for various effects. If Lulu has learned Ultima, she can use it to damage the Sanctuary Keeper even if it has Reflect status.

Yuna should buff the remaining members with Protect and Shell and cast Reflect on Sanctuary Keeper once it is poisoned. Rikku can also bestow buffs by using items or via her Mix, and Kimahri can use Mighty Guard if he has learned it. Shiva is helpful, as the Sanctuary Keeper is not immune to Heavenly Strike. Repeated use of it allows Shiva to keep attacking without risk to the party or counterattack from the Sanctuary Keeper.

If the party has a Silver Hourglass, Rikku can use it to inflict Slow on Sanctuary Keeper. This prompts it to cast Haste, but it will be reflected onto the party. A Smoke Bomb can be used to inflict Darkness to dodge the Keeper's counterattacks that hit the entire party. The party can also try using Threaten on Sanctuary Keeper.

An alternative strategy is to equip the physical attackers with weapons with the Darkstrike, Poisonstrike and/or Slowstrike abilities (one of each should be sufficient). This means that even when Sanctuary Keeper cures itself of status ailments, the party can quickly re-apply these ailments with their normal attacks. With this strategy, there is no need to cast Reflect on Sanctuary Keeper. 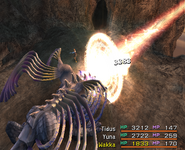