High base attack and MP, average base magick, low base HP
See stats

Following a warrior ethic from a foreign land, the samurai uses Iaido techniques to attack with his or her katana.

Samurai is a job in Final Fantasy Tactics. It can employ sword techniques known as Iaido, which draws spirits out of the katana to produce effects around the user. Not only can the Iaido abilities deal damage to foes, they can also recover allies' HP or bestow various status enhancements, and differentiate friend and foe like summon abilities. In the original version, it costs 7,100 JP to master. In The War of the Lions, it requires 8,000 JP.

Leveling this job to level 8, along with Dragoon, Ninja, and Geomancer, along with having 20 kills with the unit (the defeated units must turn into crystals or chests to count) and mastering Knight and Black Mage, will unlock the Dark Knight in the War of the Lions.

There is 1/8 chance that using an Iaido ability will break the drawn katana. The player only needs the katana in their inventory, not equipped, to use the ability. Iaido abilities are katana-specific, and since their power is determined by the user's Magick power rather than physical power, equipping the support ability Arcane Strength learned from the Black Mage can boost their power.

The Samurai is a hybrid warrior capable of dealing both physical and magickal damage. It has decent stats all round, although its physical attack is lower than the Knight's. While the Samurai cannot equip shields, it has one of the highest physical evasion attributes. While the job is powerful on its own, most katana are inferior to normal swords, and specially knight swords. This means the Samurai's damage tends to fall behind Knights' in terms of pure physical power.

While Iaido is a versatile job command, it risks permanently losing katanas, specially hazardous when using rare katanas. In addition, its damage is determined by the unit's magick attack, which makes it more powerful when used by mage classes, such as the Black Mage.

Shirahadori is one of the most powerful support abilities in the game, making the player dodge virtually any physical attack, and benefits pretty much any job. Its success rate is equal to the amount of Bravery a character has. The Samurai's Bonecrusher reaction ability is a more powerful version of the Monk's Counter, hitting from any range and regardless the damage type, although it only triggers once the unit is at low HP.

The Samurai's Doublehand ability is potent for Dragoons, although other jobs, such as Knights, can also benefit from it. 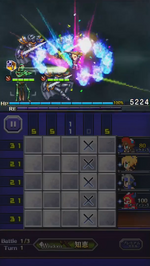 Samurai appears as a card in the Ivalice Special Arena has a limited-time special arena with eighteen floors.