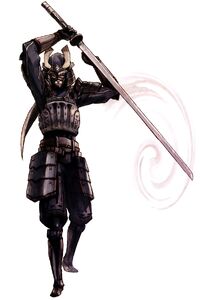 Through the study of Far Eastern martial arts techniques, these lone warriors have learned to devote their lives to their cause and to their blades, the mighty katana.

Samurai are an advanced job available to players who have reached level 30 in Final Fantasy XI. Samurai are significantly different than their previous incarnations. They are described as demon killers and they have abilities like Warding Circle that help raise party members resistances to demons.

The real advantages of the Samurai are their weapon, the great katana, the Store TP ability that allows them to accumulate TP faster than other melee classes, and the Meditate ability, which will almost instantly give 100% TP. Great Katanas are easy to make skillchains with, so the samurai can be a major force multiplier and a party player.

The quest involved in becoming a Samurai starts in the pirate city, Norg. Adventurers are sent on a mission to defeat a treant in the Sanctuary of Zi'Tah and a bomb in the Konschtat Highlands. They must then return to Norg and wait three Vana'diel days while their first katana is crafted. Having received this, they may change to Samurai.

It is originally thought that Square-Enix designed Samurai to be a tank who avoided damage primarily by use of parries. Parrying does negate all damage, but the skill is extremely hard to get to a high enough level to make this a viable option. Evidence of this theory is obvious in many of the Samurai specific armor, which have abilities and statistics that would most benefit a tank. Samurai are now used almost exclusively as damage dealers.

Warrior is one of the most common support jobs for all Samurai. This is due to high physical statistics, notably strength, and other abilities like Berserk and Double Attack that add significantly to damage over time. The majority of Samurai will probably pick Warrior as a support job up to level 60. Beyond level 60, there are still many SAM/WARs due to other abilities, like Warcry but there are other support jobs that become more competitive at that point.

Thief is a common support job after level 60 particularly because of the combination of Sneak Attack and Trick Attack. Thief will have significantly lower damage over time because of reduced strength and lack of attack boosting abilities; however, weapon skills will be enhanced when used with sneak attack/trick attack helping the thief to become a good spike damage dealer.

Ranger offers a very different playing experience for Samurai and the support job can be beneficial in many ways. First, Rangers gain an accuracy bonus which will help the Samurai hit more often both with ranged and melee attacks. Also, Samurai have the second best ranged characteristics among bow users so they are capable of doing decent damage just as a ranged combatant. With the Samurai's Store TP ability, high delay bows can allow a samurai to do a weaponskill after 5 successful hits. Barrage also helps the Samurai gain TP quickly by allowing them to land multiple hits simultaneously. Couple this with Meditate and ranged samurai can really pour on weapon skills. The only disadvantage is that it is more costly in terms of gil.

Ninja is sometimes used by Samurai at high level for no other reason than they do not have to be healed often after doing high damage weapon skills. Ninja can also aid the soloing ability of a Samurai. With the combination of Utsusemi: Ichi, Ni, and Seigan, a Samurai can avoid damage for a very long time while still dealing out a decent amount. For some Notorious Monsters, as well as for BCNMs such as those with the avatars, Samurai/Ninja can hold its own with the more traditional tank jobs. It can be considered the spiritual successor to the "Parry" tank that Samurai was once designed to be.

In more recent years, the Dancer has become the more popular subjob for the Samurai, due to its ability to use TP for healing, buffing, which when combined with the Samurai's TP-storing abilities, make it an excellent choice, especially for soloing.

Concept art of a Samurai.

Promotional artwork of the Samurai by Yuzuki Ikeda.

A Mithra Samurai in Artifact Armor.