Master swordsmen whose keen reflexes allow them to intercept and deflect enemy attacks.

The Samurai is a job in Final Fantasy V obtained from the Earth Crystal. It is a physical fighter job with some strong abilities, solid stats, and the ability to equip katanas in battle. Samurai are not strictly built around their commands the way other jobs are, but do learn some abilities that can devastate opponents.

Samurai's innately have the Shirahadori support abilities, which improves their ability to evade attacks and can grant great survivability. The ability makes mastering Samurai worthwhile, as Freelancers and Mimes will gain Shirahadori innately after mastering the job. Samurai's innate command is Zeninage, which throws gil at an enemy, costing the party money but doing immense fixed damage. Samurai also learn Mineuchi, a physical attack that can hit enemies without removing any statuses, and Iainuki, which has a chance to inflict Instant Death on all enemies.

Mastering this job on the whole party earns the "Four Samurai" achievement in the now defunct mobile and Steam versions.

Each character wears traditional samurai armor. Lenna forgoes a helmet and Galuf's helmet lacks a tassel. Everyone wears red with gray except for Faris, who wears gray with blue, and Galuf, who wears red with black and white. The sprites have been altered for the now defunct mobile/Steam port, where Faris also forgoes wearing a helmet and has her hair up in a ponytail and wears a white sweatband.

Samurai boast very strong Strength, affecting their physical damage, and Stamina, affecting their HP. Coupled with Shirahadori, Samurai have great survivability. Their Agility bonus is negligible, meaning their turn rate is not much higher than a base Freelancer, and they have a small Magic penalty (though this can be alleviated by equipping a magic skillset in their ability slot, if needed).

Equipping the Equip Katanas ability on another job grants the Samurai's +19 Strength bonus if it was not already higher.

Upon mastery, Freelancers and Mimes gain the Samurai's base Strength, Agility, and Stamina unless they already have a higher base from another mastered job.

Katanas are the Samurai's main weapon, which only they and Freelancers can wield. They have critical hit rates (the average being 12% critical), but are incompatible with Spellblade. Beyond this, Samurai can equip knives, shields, helmets, light armor, heavy armor, and gauntlets.

The best katana in most versions is the Murakumo, stolen from the Yojimbo. The Masamune sealed weapon is also notable in how it lets the wielder always act first in battle and casts Haste wen used as an item. The Advance version adds the new ultimate katana, Mutsunokami, in the post-game bonus dungeon, Sealed Temple.

The Samurai's best equipment in most versions is the Genji equipment (Genji Helm/Armor/Shield/Gloves), stolen from Gilgamesh. Some of this equipment is surpassed by equipment found in the post-game bonus dungeon in GBA and the now defunct mobile and Steam versions.

Zeninage is Samurai's default ability. It throws gil at an enemy based on the user's level; the higher their level, the more gil consumed, and the more fixed damage the ability deals. Though temporary level boosts raise damage dealt, they do not raise gil consumed. The ability is extremely powerful, but should not be used frequently as to empty the party's funds.

Shirahadori increases the ability to dodge physical attacks by 25%. Though it is a useful support ability, it takes up an entire ability slot when equipped by another job, and other means of reducing damage to the whole party are available without doing so. However, mastering Samurai grants Shirahadori innately, meaning this is where the support ability will see most use.

Mineuchi is effectively a stronger physical attack. It will ignore an equipped weapon's special abilities or effects, and will not dispel confuse, sleep, or control. In earlier versions of the game, Mineuchi will not add paralyze despite the in-game message due to a bug; this was fixed in the defunct mobile and Steam ports, and then in the Final Fantasy Pixel Remaster version.

Iainuki takes two turns to use (one to charge), and has an 85% chance to inflict Instant Death on all targets. It takes into account the level factor that magic attacks use, and will never work against Heavy-types. Though it can be used to clear through many groups of normal enemies, it will likely not see frequent use.

Since Bartz has a new moveset based on the classes in Final Fantasy V, he now has a move based on the Samurai job. Samurai is an HP attack and a charge move that starts off with Bartz charging up Zeninage, which has three levels of charge. Each level has increased range, damage and area of effect, and can potentially hit multiple opponents. If a Zeninage is successful, he finishes the attack with a wide slash with his katana.

When Bartz masters Samurai after landing it on opponents twice, his Zeninage charges faster.

Bartz's second alternate outfit is based on the Samurai class, fittingly named "Samurai". The default armor is red; the same as in the original game. His second color option is blue, Faris's armor color, and his third option is black, Galuf's armor color in the mobile/Steam release.

Similar to Bartz's moveset in Dissidia Final Fantasy NT, the main cast of V borrows abilities from several different classes as an homage to the Freelancer/Mime jobs.

Galuf also shares an ability with the Samurai class, his Level 20 Attack being the Level 3 Samurai ability Shirahadori. Through the special mechanic Final Fantasy V characters possess in Opera Omnia, Galuf can "Master" this ability after enough uses changing it into Shirahadori+. Prior to an update, this attack was called "Blade Block". 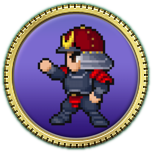