The Samurai is a fire-elemental Eidolon that appears in Final Fantasy Dimensions II. The signet can only be obtained from the Babil Tower exchange shop after completing the game's Eureka arc. The Samurai is one of Parai's strongest of signets, providing balanced stats, an attack stat of 88 at its full evolved form, and a passive that increases the physical damage of two-handed swords, which are often Parai's prefered choice of weapons.

In the original free-to-play versions of the game, the Samurai signet was a god-tier fire summon that could only be obtained through the game's summon draw shop. However, it taught the Masamune ability instead of the Wild Divider ability. In the premium versions of the game, the Samurai's Masamune ability was removed from the game and replaced with the Wild Divider ability. The Samurai was an SSS rank summon and could be equipped by any party member. In addition, a player that drew the Samurai signet from the shop would also obtain a costume voucher redeemable for a Samurai-themed costume for Aemo, Jornee, or Maina.

The Samurai summon is based on the recurring job class in the series, being described as a warrior of the east whose sharpened sword techniques are able to cut down powerful enemies. The signet artworks depict a female samurai in traditional Japanese styled red armor wielding a two-handed katana as her weapon of choice.

The Samurai's special attack is Spring of Strength, which raises the attack and magic for all party members for five turns. Summoning the Samurai costs 2 bars from the Summon Gauge.

The following are the abilities Parai can learn from the Samurai: 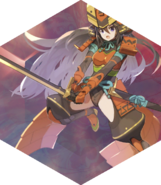 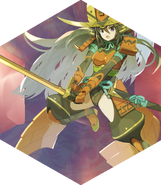 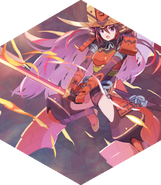