Salamander, also known as Salamandr, is a boss in Final Fantasy III. He is a mutated form of Gutsco, turned into a monster by the Fire Crystal. After his defeat, the Fire Crystal is cleansed and the party receives new jobs.
See also: Salamander (enemy)

The recommended party level is 19+. The best plan is to finish it as fast as possible by deploying at least two Black Mages to continually cast Ice spells. It is a good idea to travel to the Village of the Ancients (located at the southwestern most corner of the map) to retrieve the Blizzara spell. A White Mage should heal at every turn (the player can buy Cura from the Village of the Ancients as well).

The non-mage characters can use Antarctic or Arctic Winds, farmed from monsters in the sea surrounding the island, and obtained from certain treasure chests. This does more damage than the regular Blizzard spell. If the player runs out of Antarctic Winds and level 3 MP, they can use Zeus's Wrath.

Another viable strategy is to equip one or more Warriors with the Ice equipment purchased from the Dwarven Hollows. A Warrior equipped with the Ice Armor, Ice Helm and Ice Shield can easily survive Salamander's Fire Breath while healing with Potions. Equipping a Warrior with the Freezing Sword, which can be found on the Molten Cave's second floor, allows them to deal high damage to Salamander even while equipped with a shield. Shooting Ice Arrows with a Killer Bow is also good, however, only the Onion Knight and Ranger can use Ice Arrows. 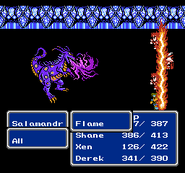 Amano artwork of Salamander.
Add a photo to this gallery

[view · edit · purge]Salamander is a mythological reptile believed to be able to breathe and resist fire. In legends, ancient alchemists are said to use Salamanders to determine the heat of the fire necessary to turn lead to gold.

Retrieved from "https://finalfantasy.fandom.com/wiki/Salamander_(Final_Fantasy_III)?oldid=3247946"
Community content is available under CC-BY-SA unless otherwise noted.