The Salamand Sword (サラマンドソード, Saramandosoodo?) is a recurring weapon in the series. It is a sword and a piece of flame equipment.

The Salamand Sword is a fire-elemental sword. It has an attack power of 30 in the 3D versions and 32 in the NES version. It can be found on the tenth floor of the Tower of Owen. In the NES version, it can also be bought in the Dwarven Hollows for 3,000 gil. When used as an item, it casts the fire spell.

Salamand Sword is a great sword that provides 41 damage and 456 delay. It deals 5.39 damage per second and accumulates 118 TP per hit. It can be equipped by level 75 Paladin and Dark Knight. It can be upgrade from Albion through the Trial of the Magians Great Sword Trials, Trial 224. 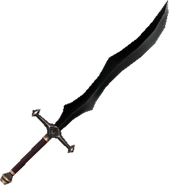 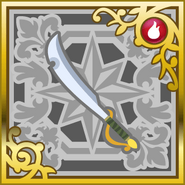 [view · edit · purge]Salamander is a mythological reptile believed to be able to breathe and resist fire. In legends, ancient alchemists are said to use Salamanders to determine the heat of the fire necessary to turn lead to gold.