A ninjato so sharp that even the blossoms dancing around it cut into foes. Raises critical power.

Sakura (桜吹雪 or さくらふぶき, Sakura Fubuki?, lit. Cherry Blossom Blizzard), also known as Sakurafubuki and Blossom, is a recurring weapon in the Final Fantasy series. It is often a katana or ninja sword with mid-to-low stats.

Sakura (Blossom in older translations) is usable by Shadow, and is purchased in Albrook, Narshe and Vector for 3,200 gil. It has 112 battle power and is wind-elemental. Outsiders can Throw the Sakura as an attack.

Sakurafubuki is a katana that provides 24 damage and 227 delay. It deals 6.34 damage per second and accumulates 61 TP per hit. It can be equipped by level 43 Ninja. It can be bought for 231 Sparks of Eminence from Isakoth in Bastok Markets (E-11), Rolandienne in Southern San d'Oria (G-10), Fhelm Jobeizat in Windurst Woods (J-10), and Eternal Flame in Western Adoulin (H-11).

Sakura is a level 22 parrying weapon that increases DEF by 17 and ATK by 1. It also increases Bravery by 5% of its base value whenever the equipped character successfully blocks an attack. It can be traded for a Kodachi, a Large Fang, and 6,870 gil.

Sakura is a level 1 parrying armor that grants +1 ATK, +19 DEF, and increases Bravery by 2% when the user blocks an attack. It can obtained by trading a Kodachi, a Chocobo Powder, and 14,740 gil.

Sakura appears as a weapon.

A ninja sword adorned with cherry blossoms, a flower that blooms but once a year for a short period of time only to wither away in an instant. The beauty of its blade and scabbard make it a highly coveted piece of art, but any who may find themselves on the receiving end of one of its attacks will meet their end as quickly as the beautiful flowers that adorn it.

Sakurafubuki is a katana that provides 98 ATK. It is obtained as Miyuki's Trust Master. 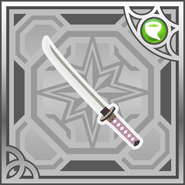 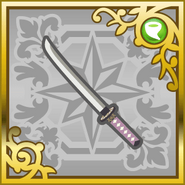 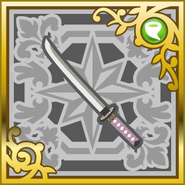 [view · edit · purge]A sakura (桜、さくら、or サクラ?) or cherry blossom, is the flower of any of several trees of genus Prunus, particularly the Japanese Cherry, Prunus serrulata. Sakura are an enduring metaphor for the ephemeral nature of life, an aspect of Japanese cultural tradition that is often associated with Buddhistic influence, and which is embodied in the concept of mono no aware.