AmaLee (War of the Visions)

A mage from the magic nation of Mysidia. Though she appears to be a young girl, she is actually over 700 years old. Sakura speaks with elegance and dignity, like a lady of old, and though she is revered by her fellow magi for her incredible power, few can tell much about her true nature.

Sakura, formerly known as the Veritas of the Bolt, is one of the main characters in Final Fantasy Brave Exvius. A wise mage of mysterious origins, she first appears in the chapter entailing Mysidia, seeking the party's help and willing to provide answers in their stand against the Sworn Six of Paladia.

Sakura is over 700 years old but has the appearance of a young girl. She has long pink hair tied into twintails with white ribbons. She wears a white coat and a reddish dress with a miniskirt with a white segment on her midriff. She wears long white boots with a brown covering.

As Veritas of the Bolt, she wears a grayish, purple suit of armor with a more purplish cape shaped in several strands. Her helmet is covered in gold plates with two small horns. When wearing her suit of armor she appears of normal adult height, rather than of child-size. While wearing her armor her weapon of choice is a large bow and arrows.

Although her appearance would suggest a young defenseless girl, Sakura is wise and direct. She is serious, no-nonsense and straight-to-the-point, behaving with the authority that comes with her wisdom. She avoids being overly patronizing, and maintains mutual respect. She dislikes being treated as a child as well as being treated as old. She is even prone to bouts of frustration when the others ignore her logic.

Sakura believes actions that result in sparing more lives are morally just, and is willing to make sacrifices if needed. She is not short-sighted so as to not consider both the greater and smaller good worth working for. She is quick on her feet and can respond rapidly, making her a reliable ally.

Despite her age, she displays some childish traits, such as a fascination for candy and an adoration of moogles. Despite acting like an old sage at first, she starts to grow fond of the group and mellows out, particularly Nichol whose intelligence and charm she is drawn to. She comes to worry about the group, knowing what awaits them.

Sakura lived in the world of Paladia when the world fell into war, splitting into two factions: those who followed Hess and those who followed Aldore. Sakura was loyal to Aldore, and under the identity of Veritas of the Bolt served as one of the main lieutenants of the Aldore faction along the rest of the Eight Sworn of Paladia.

When the Demon of Hess attacked the main base of the Aldore faction, Veritas of the Light (Sakura's sister) became worried, knowing that in her current condition Sakura would not be able to face the enemy. Sakura—along the rest of her comrades, as well as other inhabitants and locations from Paladia—were transported into the world of Lapis. Sakura and Raegen (the original Veritas of the Dark) deserted the Eight Sworn to pursue peaceful lives in this other world, discarding their suits of armor. Veritas of the Light resented Sakura as a traitor and no longer considered her a sibling. Sakura founded the Magi Nation of Mysidia, a country for mages and the oldest civilization in Lapis, and guardian of the Crystal of Light.

Aware that her comrades would plot to destroy Lapis's Crystals, Sakura spread false rumors about their location, sparking a campaign of misinformation leading the Six Sworn astray for a long time. Keeping in contact with Raegen, she was aware of his son Rain and adopted son Lasswell, and kept track of them during their adventure.

After the defeat of Veritas of the Waters, Sakura encounters the new Veritas of the Dark and blocks his path with an illusion. She confronts Dark, believing him to be Raegen, to renounce his desire for revenge and ask him to return to the peaceful life he was supposed to have pursued. Dark denies any such allegation, and Sakura realizes another has taken her former comrade's mantle. She remains confident he cannot defeat her, but he brandishes the Sacred Ring of Paladia and unleashes an attack and she teleports away.

In Zoldaad, Sakura is pursued by an angry dog and Rain's party arrives to help. Jake attempts to flirt with her, but Sakura rejects his advances by revealing her true age: she is over 700 years old. The party is speechless, although Jake continues to try and flirt. Sakura reveals she knows the party as well as their goals and promises to answer their questions if they escort her to Mysidia. Since the party wants to go to Mysidia to protect the Crystal, they accept.

Lasswell asks how Sakura knows Rain, whom she had called by name. She reveals she knows about Lasswell too. Lasswell deduces she is a comrade of Raegen and thus decides to treat her with hospitality. As they approach Mysidia a White Mage calls for help as their town is being assaulted by monsters. Rain wants to help, but Sakura tells him to reconsider, as he has more important goals to pursue. She explains that the Sworn Six seek to destroy the Crystals, and if they succeed, the world will be destroyed. She encourages Rain to forsake the smaller good in favor of the greater good, but Rain, remaining true to himself, cannot reject a plea for help, and takes a detour with the party following.

The party drives the monsters away, but Sakura scolds Rain, saying that if the Veritas destroy the Crystals the world, including that village, is destroyed, making his efforts in vain. Rain responds that even if they succeeded, he could not approve of a world built upon the sacrifice of others. Sakura believes that people like Rain could have what it takes to save the world and says to Raegen that his son has passed her test.

In Mysidia, she reveals that she founded the nation. Veritas of the Earth and Sakura's sister, Veritas of the Light, attempt to attack the Crystal of Light. The party reaches at the Crystal Chamber where Sakura discloses her misinformation strategy that had allowed her to protect the Light Crystal, revealing that the Crystals of Ice and Lighting were long destroyed. The group is ambushed by the Veritas of Earth and Light, and Sakura greets her sister. Light strikes Sakura, leaving her surprised that Light has been growing her power. The party tries to interfere, but Earth uses a quaking attack and pushes them outside.

The party fights their way through and meets the two Veritas at the chamber. Earth is displeased at seeing the current Fina is too weak to fight and tries to force her into her true self and begins charging power. Sakura believes they cannot afford to lose Fina and teleports herself and the party away, knowing they have a chance with one more Crystal to protect, leaving Earth angered that Sakura would leave without fighting.

Dark Fina reveals that the other Fina is still alive in her mind, but since the other Fina appears when Dark Fina is devoid of power, if things are left at present, the other Fina will likely disappear. Sakura knows of a way to save her and leads the party to the Magic Library where she opens a secret passage, saying the library is not of this world, and warns the party it is full of monsters. After fighting a Byblos possessing a book, Sakura has Dark Fina touch it and concentrate on her memories from 700 years ago. The party's minds are sucked into Fina's psyche and they do not recognize their surroundings. Sakura explains they are in Fina's mind in a world of her memories, the World of Paladia, from where the Eight Sworn of Paladia and Dark Fina hail from.

Lid is confused as she believes the group to be of six, but Sakura reassures her it will become clear. Dark Fina feels nostalgic and warns the party to be careful as the world is at war. Believing things could get difficult if she is seen with them, Dark Fina vanishes, but is ready to appear if they need her.

As they explore the memory world, Rain is distraught about killing people with Nichol unhappy they are forced to kill in self-defense. Rain begins to think the Veritas are the "good guys" in this war, but Sakura claims that in war, there is no clear right or wrong side.

After they defeat the Veritas of the Earth of the memory world, Sakura returns the party into the real world. Veritas of the Light appears and prepares to kill the party. Rain tries to plead, now having witnessed their former selves as good people. Light explains that Raegen, their former comrade, was (in her view) led astray by Rain's mother, Sophia. Rain tries to ask further details but Light, full of rage, attacks the party.

They defeat her with her suit of armor falling apart. Sakura greets her sister, and Light is disgusted, deeming Sakura unworthy of sharing a familial bond with her as a traitor to their cause. Light attempts to attack Sakura, but she is too injured. Light scoffs at her wounds as being nothing in comparison to the humiliation she has endured. Rain asks Light about his mother. Light, knowing Rain is Raegen's son, tells him that Raegen was the original Veritas of the Dark who defected due to Sophia. The party is left confused as to how the Veritas of the Dark can be a traitor, yet be the enemy, and conclude the current Veritas of the Dark is someone else. They demand more answers but Light refuses and prepares to unleash the magical power she's been accumulating. Dark Fina tries to stop her, but cannot muster enough power. Sakura acts as they are engulfed in a magical explosion.

Sakura is a story unit acquired after clearing Magic Library - Showdown of Destiny. Her job is Sage with the roles of Physical Damage, Magic Damage and Support. She starts at ★3 and can be awakened up to ★5. She has several variants: "Hunter Sakura", "Grim Lord Sakura", and "Maiden Sakura" (all of them of time-limited availability).

Her Season Two variant, "Blossom Sage Sakura", is a 5-7★ Rare Summon. Her stats surpass that of her story counterpart and her skillset is reworked. She is one of the strongest magic-based attackers, being a superb "finisher". Like the other so-called CG units, Sakura's Limit Burst ("Eternal Ray") is a special CG movie and consists of a powerful 40-hit attack.

Sakura also appears as enemy boss in Zazall Valley - Warrior and Warrior. She is accompanied by the visions of fellow Mysidian mages, Marie and Roselia.

Sakura's elemental affinity may be inspired by her close relationship to certain characters, namely Veritas of the Dark (her old friend), Veritas of the Light (her sister) and Lightning (herself). 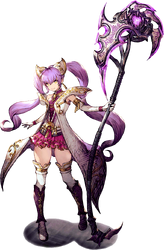 Sakura appears as a summonable vision and optional playable character. She retains her original appearance. She serves as a character representative from Final Fantasy: Brave Exvius. 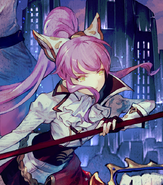 Illustration for the game's second 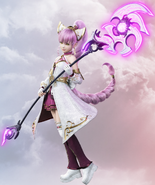 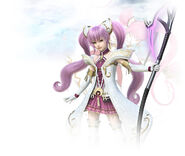 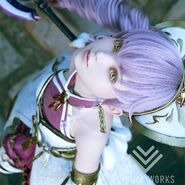 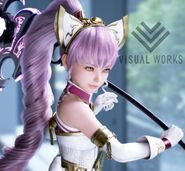 Sakura and the main cast of Final Fantasy Brave Exvius in the Touch It music video.

[view · edit · purge]A sakura (桜、さくら、or サクラ?) or cherry blossom, is the flower of any of several trees of genus Prunus, particularly the Japanese Cherry, Prunus serrulata. Sakura are an enduring metaphor for the ephemeral nature of life, an aspect of Japanese cultural tradition that is often associated with Buddhistic influence, and which is embodied in the concept of mono no aware.