A prince of the sewer-dwelling sahagin. He wields a special lance that symbolizes his royal status and is more powerful than that of a typical sahagin. He believes his species must take control of the surface world if they are to thrive.

His stagger gauge cannot normally be affected, but he becomes susceptible to staggering when in counterattack mode. His counterattacks are aborted when he is staggered.

Sahagin Prince is a unique and more powerful variant of the sahagin. Much like his underlings, the prince boasts high defense attributes (albeit slightly lower), but also a large health pool. His main attack is Jump, which can deal high damage and knock down characters if they're not blocking.

He employs a variety of spear attacks that can easily overwhelm the player. Wild Stab is particularly dangerous as it is a multi-hit attack with high range, while Splash Harpoon causes gushes of water to erupt from the ground, dealing damage in an area. He can also shoot high-pressured water from his mouth, and cast Salientian Curse to inflict

The prince will enter a counter stance after being attack enough, which will send shockwaves to any direct attacks, and knock down the player. The prince's stagger gauge can only be built during his counter stance. If he is knocked down from tier 3 magic or limit breaks, he will become pressured, but unless he was knocked down in counterattack mode, his stagger gauge will not fill.

During the fight against the Sahagin Prince during "Corneo's Secret Stash", he is fought alongside two regular sahagins.

Unlike most biological creatures, the Sahagin Prince is weak to

Much like with regular sahagins, Jump can only be avoided by running very far from the prince, so it is best to block to mitigate the damage, or by dodging backwards at the last second. Salientian Curse can also be dodged, and the prince will be briefly vulnerable after it. When the prince enters his counter stance, notified by a small energy surrounding the prince, the player should focus on using fire spells to quickly raise his stagger gauge.

It may be ideal to pair

Barrier on everyone to resist physical damage. Barret's Lifesaver should be used, along with

Steadfast Block Materia on Barret and Cloud, and

Fire Materia on the main attacker's weapon is ideal, as well

Synergy Materia with Fire on either Tifa or Barret. The player should defeat the regular sahagins first by attacking them after they land from Jump, and focus on the prince after, by staggering him and then using Tifa's Unbridled Strength while hammering him with Cloud and Barret.

In the Shinra Combat Simulator the prince can pose a threat since there are no other party members. On the other hand, the Sahagin Prince is fought alone, and the player has plenty of room to maneuver in the large arena to dodge his attacks.

On the hard difficulty, the Sahagin Prince will be even more aggressive, using Jump and Salientian Curse more often. He is more resilient and harder to interrupt. Because items are not available, one must avoid the Salientian Curse at all costs.

Since the Sahagin Prince is often the last challenge the player will face before finishing Chapter 14, expending MP at will with spells is recommended to quickly dispose of him. Having

First Strike Materia on someone and opening with a magnified

Firaga, as well Synergy with Fire, can quickly dispose of the two regular sahagins while heavily injuring and pressuring the prince.

Cloud in particular can deal massive damage to the sahagins via Counterstance when the prince uses Jump. Once he is staggered, Tifa can unleash True Strike to raise its stagger damage while Cloud and Barret retaliate with their strongest abilities. 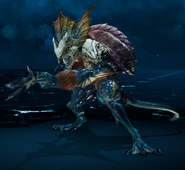 Counter while in Pressured state.