Aquatic creatures that have taken up residence in the sewers. They are intelligent enough to have created their own language, and they defend their territory with harpoons of their own fashioning.

Sahagin is an enemy in Final Fantasy VII Remake, fought in the Sewer System in Chapter 10, "Rough Waters", and in Chapter 14, "In Search of Hope". They wield spears and have hard shells that make them hardy. They turn party members into frogs.

Fire or ice spells rapidly fill their stagger gauge, while physical attacks have little effect on them.

Follow the Waterway, Crossing the Trunk Line, Operating the Pump, Through the Underground Waterway, Recovering the Key

Sahagin have high physical defense, and use the Jump ability, which can deal high damage and knock down characters if they're not blocking. When fought in high numbers, they can quickly overpower players with a succession of Jumps, effectively stunlocking the party. Sahagins hurl their harpoons at their victims, and cast a spell called Salientian Curse, both which can inflict

Toad. Upon throwing their spears they will fight unnarmed, losing the ability to use Jump, and will instead perform a significantly weaker attack called Flying Kick.

Sahagin are weak to

Fire and fire and ice spells can be used to stagger them.

It is best to try evade or block the sahagin's jump attacks.

Magnify Materia to damage both groups of enemies, as both sport hard shells and resist physical damage. Though the sahagin are not weak to

Aerith can pair fire materia with

HP Absorption Materia and focus on spellcasting while using Arcane Ward. Cloud or Tifa can either pair fire materia with

Elemental Materia or spellcast themselves from within Aerith's ward. With

ATB Boost Materia, Aerith can open every battle with Arcane Ward, followed by ATB Boost, and then use

Fira to instantly stagger or destroy one of the sahagin, allowing Tifa and Cloud to finish them off. Since the final combat challenge of Chapter 10 is against sahagin, the player is free to expend all MP here.

Parry Materia is ideal to avoid the sahagin's Jump attacks for Tifa, while Cloud and Barret equip 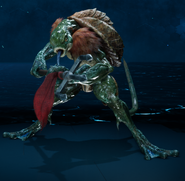