Sahagin are a race of Beastmen that live on the remote island of Elshimo in Final Fantasy XI, far from the major nations of Vana'diel. They are the unsavory neighbors of the citizens of Kazham and pirates of Norg. Sahagin can be found in greatest numbers in the Sea Serpent Grotto.

Sahagin are amphibious creatures that spend much of their time practicing primitive fishing techniques. Other than to protect their territory, Sahagin rarely interact with other races. Apart from limited trading with Norg (they often trade shellfish for metal trinkets salvaged by the pirates), the Sahagin have little contact with the outside world.

A few Sahagin reside with the Mamool Ja in the Near East, taking on the Mamool name. These Sahagin are rarely seen in combat with the Mamool, so the true relationship between them remains unknown.

Many Sahagin worship the elements, and have made deities out of sea serpents and oddly shaped stones within their grotto. Even so, within their ranks are some who follow the teachings of the Goddess Altana.

Sahagin generally only have four jobs, with exceptions being rare even among Notorious Monsters. They are almost always Monks, Dragoons, Bards, or White Mages.

Sahagin come equipped with a job, and readily use spells available to that job. 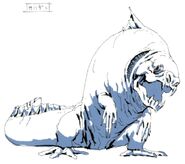 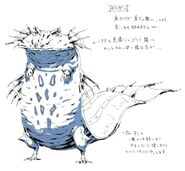 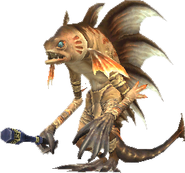