Final Fantasy Wiki
Register
Don't have an account?
Sign In
Advertisement
in: Characters in the Chocobo series

Sahagin is a recurring non-player character in the Chocobo series. He usually appears as an obstacle in Chocobo's adventure.

Sahagin appears as an enemy.

Sahagin also appears as an enemy.

Sahagin is a dueler that can be found in the Undersea Temple. There are also a few minigames related to him where a frog controlled by the player must avoid Sahagin; and the direct sequel from this game where he shoots tridents to the Chubby Chocobo's Ship. As a dueler, he does not have a specific accent, and will switch to different ones whenever he speaks, apologizing for his inability to keep a specific one.

Sahagin appears in both the PlayStation and Game Boy Advance versions of the game. There is a friendly character called Ashaki and can be unlocked as soon as the player defeats Sahagin enemy. 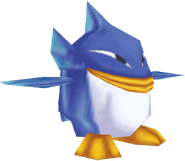 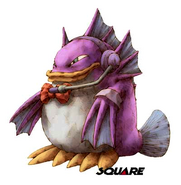 The Chocobo series
Community content is available under CC-BY-SA unless otherwise noted.
Advertisement