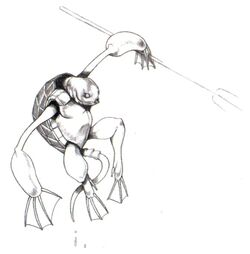 The Sahagin (サハギン, Sahagin?) is a recurring enemy from the series. It appears in most games, and often has stronger counterparts. The Sahagin is usually portrayed as a fish that walks on land, though in Final Fantasy VII (and other games of the compilation) and Final Fantasy IX, they appear as spear-carrying turtle-like creatures who can hide in their shells to nullify physical damage, and in Final Fantasy XV they are crocodiles. While they are usually aquatic, in some games there is a species of Sahagin that lives in the desert.

Sahagins appear as enemies. Two palette swaps of the Sahagin, the Sahagin Prince and the Sahagin Chief, appear in the original version and a third, the Sahagin Queen, is featured only in the Dawn of Souls and 20th Anniversary versions.

Sahagins are fought on the seas of the Floating Continent. They provide the least amount of Experience points of the enemies encountered in the sea. A pink version, the Merman, appears as an enemy in the Subterranean Lake.

Two other forms exist in this game: the Desert Sahagin and Sahagin Prince.

The Desert Sahagin is the only one that appears in this game.

Main article: Sahagin (The After Years)

Various versions of Sahagins appear in-game, and are all weak to Lightning-elemental attacks, save for the Desert Sahagin which is weak to Ice elemental attacks. They tend to not be very powerful when they are encountered.

The Sahagins appear as a normal enemy. It is a rare enemy that can be found at one area only, the waters southwest of the Phoenix Tower. It only relies on physical attacks. The Nix and Merrow are other forms of Sahagin.

The Sahagins appear as an enemy in the Midgar sewers. They mostly just use "Water Gun" and "Harpoon" to inflict minor damage, but if they use "Shell Defense" their Defense increases greatly. It is best to use magic to fight them. A variation, the Desert Sahagin appears in the area around Cosmo Canyon.

Much like in the original game, Sahagins again appear in the Midgar sewers. They are dangerous due to their high physical defense, as well the Jump ability, which can deal high damage and knock down characters if they're not blocking. When fought in high numbers, they can quickly overpower players with a succession of Jumps, effectively stunlocking the party.

Sahagins can also hurl their harpoons at their victims, and are capable of casting a spell called Salientian Curse, both which can cause the Toad status effect. Upon throwing their spears they will fight unnarmed, losing the ability to use Jump, and will instead perform a significantly weaker attack called Flying Kick. 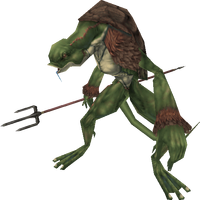 This foe may seem tough, but is easily dealt with using physical attacks provided one is quick. Sahagin appears as a regular enemy and comes in many varieties.

Sahagin is an enemy in Chapter 5 fought in the Nibelheim Sewers. It can fight both in long range and short range battles, using its trident when the player gets too close. Its weak point is in its head.

This section about an enemy in Dirge of Cerberus Lost Episode -Final Fantasy VII- is empty or needs to be expanded. You can help the Final Fantasy Wiki by expanding it.

The Sahagin is an enemy that can be found in the Qu's Marsh on the Outer Continent. They can go into their shell to nullify physical attacks.

Unlike previous games, Sahagins appear as green-yellow scaly fish. Most Sahagins can only travel underwater, though some also have webbed feet so that they can walk on land.

Tidus first encounters Sahagins in the Submerged Ruins. Sahagin Chiefs were also released within the Sphere Pool in Luca after the first blitzball tournament. Sahagins also dwell in the Via Purifico underneath Bevelle.

The Sahagin is an enemy type whose members are not particularly powerful and can be dealt with easily with a simple Thunder spell or Thunder Blade attack. Its members are the regular Sahagin, Sahagin Chief and Sahagin Prince. It takes 12 kills to Oversoul a Sahagin-type fiend.

Sahagin are one of the beastmen. They live on the remote Islands of Elshimo, far from the major cities, but make unsavory neighbors for the citizens of Kazham and pirates of Norg. Sahagin can be found in greatest numbers in the Sea Serpent Grotto.

Water-spouting creature spawned in the deep places of the sea.

Sahagin appears as an enemy and summon. Sahagin is an Esper. The Rank I Water Melee summon, it costs 10 affinity points to summon. Its normal attack, Smack, deals damage to one foe.

A Sahagin called Namingway appears in the Galbana Sky Saloon. When spoken to, he can change the airship's name.

New types of sahagin are present in the sequel, but none from the previous game return.

Once again, no Sahagin types from the previous two games appear, rather there is a single Sahagin type, the Desert Sahagin, which are native to the Dead Dunes.

This aquatic race of beastmen reside in a city built at the bottom of the Indigo Deep. Known for attacking ocean-faring ships and dragging sailors screaming into the murky depths, the Sahagin are often the subject of angry and fearful curses on the streets of Limsa Lominsa. Since the advent of the Seventh Umbral Era, these hostile denizens of the sea have taken to seizing territory along the Vylbrand coastline in order to establish new spawning grounds.

Sahagin are a beast tribe from La Noscea, and are constantly fighting against Limsa Lominsa, attacking ships or citizens wandering outside the city-state. Their Primal is Leviathan, sometimes summoned to attack Lominsan ships, and their stronghold is the Sapsa Spawning Grounds in Western La Noscea.

They are known to be allied with Travanchet and pirate groups from Mistbeard Cove. Among the most notorious of their allies are the Serpent Reavers, pirates who have been tempered (or "drowned") by Leviathan himself.

Although the Sahagin have little love for the other races of Eorzea, not all desire conflict. Among those, Clutchfather Novv believes continual warring against Limsa Lominsa in the wake of the Calamity is suicidal. Instead, he feels establishing more peaceful relations is vital so the Sahagin race can recover, even going as far as aiding those harmed by more aggressive Sahagin such as the Coral Tridents.

In the First, the Sahagin are known as the Ondo. Unlike their Source counterparts, they are reclusive and prefer to stay in the Tempest, occasionally interacting and trading with people on the surface for goods such as fruit. Due to the darkness of their home, they remain relatively untouched by the Sin Eaters that plague Norvrandt.

A Wind-up Sahagin appears as a minion.

Sahagin are crocodile-like enemies fought in Cleigne in the Wennath Riverhead, north and east of the Vesperpool, and in Maidenwater. They can also be fought during the Acquit Not Evil Hunt and appear in Totomostro. The Deadly Waters-style fishing lures are fashioned after sahagin.

Sahagins appear as enemies in Conall Curach and the Selepation Cave. They jump out of water and have the ability to freeze players. Sand Sahagins also appear in the Lynari Desert. Contrary to series tradition, Sahagins are weak against Fire rather than Thunder.

Sahagin appears as a normal enemy in the game. Other versions of the Sahagin are Dark Sahagin and Sahadon.

Main article: Sahagin (My Life as a King)

Sahagin appears as a summon. It is a magic summon that costs 1 slot to summon.

Sahagin appears as normal enemy in the game. Another version of the Sahagin is the Sahagin Ghost.

Sahagins appear, although they are called Water Hag in the English version. The Desert Hag is a weaker variation.

The Sahagin is an enemy found in the Cave in Floatrocks and the Ocean. They have a chance of dropping Keys.

The result of a mysterious disease that turns humans into WaterHags. They will attack when encountered in the Future World, but if the party has transformed themselves into WaterHags using the lost magic "Morph", interesting things may be learned from them.

Sahagin is an enemy and species. In the later mobile releases which removed the Challenge Dungeon, only the ordinary Sahagin appears, however the original phone release had more.

Red, green, yellow, and light blue sprites exist in the data. In the phone release the enemy Desert Sahagin and Orobon exists and uses two of these sprites. The Merrow enemy is a possibility of being another Sahagin enemy, though there are other candidates.

This aquatic humanoid was once known best for assaulting ships at sea, but has now expanded its habitat to oases, marshes, and other freshwater environments. Its strong shell deflects physical blows, but lightning travels right through it.

Sahagin appears as an enemy, based on its Final Fantasy IX appearance.

Sahagin from Final Fantasy IV appears as an enemy.

These fishmen have a timeless turf war with rival imps over prime waterside real estate.

The Sahagin appears as an enemy encountered on the Palamecia Desert. It uses Claw and drops the Javelin.

Sahagin also appears in the Chocobo series in most games. He is an enemy in both Chocobo no Fushigi na Dungeon and Chocobo's Dungeon 2; a rival in Dice de Chocobo and a Dueler in Final Fantasy Fables: Chocobo Tales.

There are also a few minigames related with him in Final Fantasy Fables: Chocobo Tales, where a frog controlled by player must avoid Sahagin; and the direct sequel from this game where he shoots tridents at the Chubby Chocobo's Ship.

Sahagin is a chance card. Its card ability is "Move one more step". 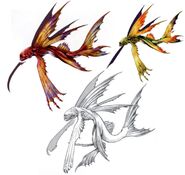 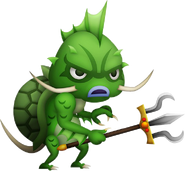 In Spanish it's sometimes translated as "Gurami".