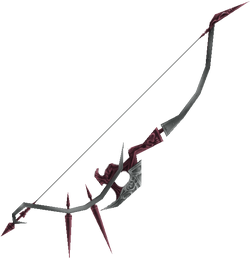 The Sagittarius (宿命のサジタリア, Shukumei no Sajitaria?) is a recurring bow. It is one of the strongest, if not the strongest, weapons of its kind in all of its appearances.

While there is a Sagittarius' bow in the game data, there is no way to obtain it. There is a Notorious Monster by the name Sagittarius X-XIII; however, it drops the Loxley Bow.

The Sagittarius is the the strongest bow available. Its license can be found in mid-bottom of a License Board for 120 LP and the bow has 93 Attack power. Bows are among the slowest weapons with 2.96s charge, and 1.4s action time. It is named Silver Bow in the Bazaar price list, and costs 60,000 gil. The Sagittarius requires several rare loot pieces to synthesize.

In the Zodiac versions, it provides 97 Attack, 36 CT, 5% critical rate, and requires the Sagittarius license for 130 LP. It can be found as a treasure in Cerobi Steppe (Crossfield), and stolen from Luxollid (3% chance) and Krjn (3% chance) in Trial Mode Stage 71.

The stronger version, Dhanusha provides 109 Attack, 10 Evade, 36 CT, 20% critical rate and requires the Dhanusha license for 200 LP. It can be bought from the bazaar for 100,000 gil after selling Beastlord Horn x3, Moon Ring x3, and Sagittarius Gem x4. Both bows can be equipped by Archer class.

Heavenly bow that seals the fate of its target.

Sagittarius is Fran's strongest weapon. It has the Attack power of 100 with Magick power of 50 and Speed of 60. It is mission reward for Mission #25: "An Uninvited Invitation". It uses a generic bow sprite during battle.

This weapon hums with Mog's fervent prayers. Increases ATB gauge by one segment.

The Sagittarius bow is one of the strongest bows for Serah, second only to Arcus Chronica. It raises Strength by 115 points and Magic by 160. It can be acquired post-game for 60,000 gil, an Inazami, Trapezohedron x2 and a vial of Phoenix Blood.

The Sagittarius Bow is the strongest bow, added in the War of the Lions remake. It can be obtained via Rendezvous.

A bow blessed by the gods of archers. Its arrows fly straight to the foes heart.

Fran wields the Final Fantasy XII version of the Sagittarius in her character model.

A powerful bow from the distant world of Ivalice. It has a peculiar design addition of two spines and a small shield. It is said a viera woman who left home and became a sky pirate fought with this very bow.

A bowsword-type weapon from a distant world. A woman who traveled through various timelines in search of her missing sister is said to have wielded this bow. It's said that she would transform the Sagittarius depending on the situation, occasionally using it as a sword.

Sagittarius is a bow obtained as the Super Trust Master reward from Blue Sky Belle Fran. It provides 164 ATK, +70% accuracy, requires both hands to wield, has a damage range of 125-175%, and increases physical damage against beasts and birds by 50%.

Sagittarius (FFXIII-2) is a bow obtained as the Trust Master reward from Serah. It provides 76 ATK, 145 MAG, +75% Accuracy, requires both hands to wield, has a damage range of 125-175%, and increases magic damage against birds by 50%. 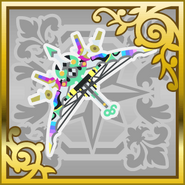 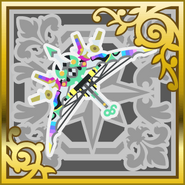 [view · edit · purge]Sagittarius is one of the constellations of the zodiac, and its also a zodiac sign used in astrology.