The pen is mightier than the sword.

The Sage (賢者, Kenja?), abbreviated as SAG or SGE (賢, Ken?, lit. Wise), is a job class that has appeared in a number of games in the Final Fantasy series. The Sage could be considered a heavily magic-specialized variant of the Red Mage, being able to cast both Black and White Magic, but being physically very weak with virtually no prowess with weapons. They also have low HP and speed and weak physical defenses as most mage-type classes do. Sometimes they have a lower MP total than a regular mage, but this is compensated by their ability to use any kind of magic from both schools unlike the regular Red Mage that has a limited pool.

The Sage is a job gained in Eureka in the NES version, while it is gained from the Earth Crystal in the 3D versions. Sages are highly adept mages who have mastered all levels of the Black and White arts. While they have numerous techniques at their disposal, their MP is limited compared to those spell casters who are more specialized. The Sage is considered to be a powered-up version of the Red Mage job, but it lacks the physical offense in exchange for focusing on Black and White arts.

Tellah is a Sage and is able to cast limited White and Black Magic when he joins the party, as he has forgotten much of his spells in his old age. He later remembers the spells, becoming able to cast all but a select few spells. Tellah has very low MP, however.

Palom mentions wanting to become a Sage like Tellah, but shows no proficiency for White Magic. Fusoya the Lunarian could also be considered a Sage.

Palom schools Leonora in Black Magic, while she already knows White Magic. When Palom asks if she is going to become a Sage, she says no, however, towards the story's end Leonora confirms her recent decision is to become one after all.

Sage (SGE) appeared as a new healer job in the Final Fantasy XIV: Endwalker expansion. The job focuses on using barriers to defend their allies. The job uses a weapon original to the game called Nouliths, a series of flying aether arms that are controlled entirely by the user's aether.

Sage (SAG) is a job exclusive to nu mou. Sages are similar to Alchemists in that they have some status ailment magic and wield maces in battle. While their Weapon Attack and Magic Power stats are above average, and they have high MP, they have one crippling flaw: they are the slowest job. For this reason, it is to a nu mou's advantage to learn the Sagacity Skill action ability, especially the powerful spells Ultima Blow and Giga Flare, and then switch to a quicker job while equipping Sagacity Skill as the secondary action ability.

Sage is a job class for the nu mou. They primarily use maces to cast damaging spells and status effects. A good spellcaster class since it has a decent array of skills, Sage can equip shields and has a high Move range. A Sage can be particularly useful when combined with Time Magick as the secondary ability, becoming able to place buffs, debuffs, restore ailments and wreak havoc with damaging spells.

The Sage is proficient in using both White and Black Magic.

"Onion Sage" from Final Fantasy III appears as a summon.

Sage is one of Onion Knight's EX Modes. While a Sage, his magic attacks do more damage and fire more projectiles as well as having access to the spell book EX Burst.

The Onion Knight retains his Sage EX Mode with the same effects.

Sage is also an advanced job that can be selected for a character in the player's party for Quick Battle, Friend Cards, or wireless matches. Combining the powers of the Summoner, Black Mage and White Mage, and doubles the rate at which the EX Gauge fills.

Even these grandmasters of all magic are spent after casting their beloved Meteor spell.

The Sage is a character available to the party, he uses the Meteor ability during battle. He unlocks at level 56.

Sage is a job unlocked after the the 4★ quest "Aptitude Exam: Dragoon and Sage". The Sage uses high and ultimate magic to deal massive damage to foes.

A card of Wol as a Sage appears.

The Sage appears on an ultimate card. 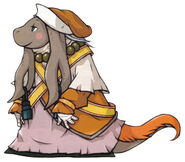 Yunita as a Sage in Final Fantasy: The 4 Heroes of Light.

Artwork of a Sage in Bravely Default: Praying Brage.

Onion Knight as a Sage in Dissidia Final Fantasy.