Sage is a job in Final Fantasy XIV introduced in the Final Fantasy XIV: Endwalker expansion. The job focuses on healing and using barriers to enhance their allies' defenses while using nouliths to channel aether to attack their foes. They have no base class and start at level 70.

The nation of Sharlayan is the cradle of knowledge, and the Studium its foremost institution of learning. Yet more so than its incomparable library and formidable assemblage of Archons, this prestigious academy is famed for blending traditionally distinct fields to produce revolutionary new disciplines. Among these, perhaps the most distinguished is an altruistic art which draws upon the wisdom of aetherology, sorcery, and medicine. Dubbed somanoutics, the art seeks to heal and protect by manipulating corporeal aether through the use of nouliths, a flying array of foci. Practitioners are dedicated to the betterment of mankind, and for their wisdom and compassion, eventually came to be known simply as sages.

The Sages are classified as a barrier Healer, with unique mechanic of augmenting their spells with Eukrasia to heal or grant barrier to the targeted allies. They're expected to attack consistently, and they have the most variations of damaging spell among Healers. In Endwalker, Alphinaud Leveilleur changes his job into Sage, inheriting his father's nouliths.

Sages use nouliths as their weapons. Their armors and accessories are made up of "Healing" gear, like all Healer classes.

The primary attribute for sages is mind, which boosts their healing magic potency, and should always be prioritized over other attributes. As healer, they draw the most benefit from the critical hit, piety, spell speed, and determination secondary attributes, which all improve their healing capabilities in some way.

The Eukrasia Gauge indicates that the effect of Eukrasia is active. Eukrasia strengthens Dosis, Diagnosis, and Prognosis, which change spell effects.

The Addersgall Gauge displays the amount of Addersgall that has been applied. Addersgall increases by 1 stack every 20 seconds. The Sage can use the amount accumulated to execute several actions, such as Druochole and Kerachole (acquired at level 50).

When the barrier granted by Eukrasian Diagnosis is completely absorbed by nullifying damage, it will grant 1 stack of Addersting (with maximum of 3 stacks), and the stack will be visible on the Addersgall Gauge. The Sage can use the amount accumulated to execute several actions, such as Toxikon and Toxikon II (acquired at level 82).

On July 30, 2021, Naoki Yoshida addressed the players on a lodestone post about a design change regarding the Sage's job icon after receiving player feedback from around the world over the icon triggering trypophobia in some players (discomfort when seeing clusters of small holes or bumps). The new job icon has the holes that represent the nouliths filled in and the two on the outside pointing inwards. [1] 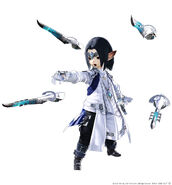