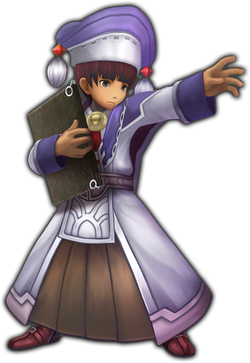 Sages have the highest magical attack and healing power, and can use their Concentrate ability to enhance their own skills.

Sage is one of the jobs available in Final Fantasy Explorers.

It is unlocked after completing the 4★ quest "Aptitude Exam: Dragoon and Sage". It can be mastered by completing any 10 quests, then the 5★ quest "Mastery Trials: Sage."

The Sage uses high and ultimate magic to deal massive damage to foes. Sages can initially equip tomes. After mastery staves and rods can be equipped.

The Sage is proficient in all high-ultimate level magic.