Staff that boosts the power of holy magic. Full power from back row.

The Sage's Staff (賢者の杖, Kenja no Tsue?), also known as Staff of the Magi, Magi Staff, and Life, is a recurring weapon in the Final Fantasy series. It's often among the stronger weapons for magic users, and usually boosts the Holy element and White Magic. Its counterpart is the Mage's Staff.

A staff that casts Life when used.

The Sage's Staff provides +15 Intelligence, 20 Attack, 10 Accuracy, and 15 Critical, and is equippable by both versions of the White, Black, and Red Mage. In the Dawn of Souls and 20th Anniversary editions, it drops from Squidrakens and is found in Whisperwind Cove.

When used as an item, it casts the Life spell. When a character wielding this weapon casts Holy, the damage is doubled. If a Black Mage wields the staff and casts Holy using the Lightbringer sword, it can do more damage than even Flare.

The Sage Staff is the Sage job master item given by the Legendary Smith. It provides 110 Attack and +10 to all other stats.

Staff infused with the power to revive.

The Sage Staff is found in the Lunar Subterrane, casts Life when used as an item, and provides +15 to Spirit. It provides 48 Attack, 15 Accuracy, and deals extra damage to undead enemies.

In the 3D versions, Sage Staff has an attack power of 38 and accuracy of 80. It can be equipped by Golbez if hacked into the party.

The Sage's Staff is the second strongest staff, being bested by Seraphim Mace, and provides 45 Attack, 15% Accuracy, and +10 Spirit. It casts Raise when used as an item, and is found in the Subterrane after defeating Cagnazzo.

The Sage's Staff is one of the 12 Sealed Weapons. It has 45 Power (53 when used with Goblin Punch) and powers up Holy-elemental attacks by 50%. If used as an item in battle, it casts Raise. The staff will do eight times the normal damage to undead targets.

The Sage's Staff is the second stage of restoring the Claustrum Relic Weapon for Black Mages and Summoners, arguably the worst Relic Weapon upgrade choice as it enhances no magical aspect of either job.

The Staff of the Magi is the most powerful staff. In the original version it can be stolen from Luxollid. It has an Attack Power of 46, and boosts magick power more than any other staff. It also enhances the power of the Holy spell by 50%.

In the Zodiac versions, it provides 53 Attack, 8 Evade, +8 Magick Power, +5 Vitality, enhances the potency of Holy, Wind, and Ice-elemental attacks by 50% and requires the Staff of the Magi license for 115 LP. It can be found in the Great Crystal after Way Stone X, dropped by Oversoul (1% chance), or from the Hunt Club sidequest. It can be equipped by the Black Mage.

An ordinary wooden staff that one might find anywhere.

The Staff of the Magi (Sage Staff in the PlayStation version) is a high-ranked staff that provides 7 Attack, 15% Weapon Defense, and can be found as a treasure in Midlight's Deep.

A staff found in an ancient castle, long hidden from the world. It is said the soul of a great sage resides within.

The Staff of the Magi is the strongest staff, which provides +40 Attack and +5 Resistance, and can be wielded by White Mages, Summoners, and Dancers. It teaches Refresh to White Mages and Jitterbug to Dancers, and can be bought for 12,000 gil in the shop after creating it in the Bazaar after using a High Arcana, Godwood, and Gold Chalice.

Sage's Staff is an artifact that increases Magic by 3.

This section about equipment in Final Fantasy Crystal Chronicles: Ring of Fates is empty or needs to be expanded. You can help the Final Fantasy Wiki by expanding it.

A rod only the wisest may wield. Those who are unqualified find it too powerful to handle.

It must be obtained from the Tower on Hard or Very Hard mode, and then created for 1,800 gil by using an Adamantite, Orichalcum x3, and Ebonite. When turned into a jewel, a level 3-9 Sage's Staff makes an Ebonite, level 10-19 makes a Cat Eye, and level 20-30 makes a Magic Stone 5.

The Sage's Staff has an attack of 6 and magic attack of 14. It can be bought from the multiplayer shop in Arbor for 6,750 pts.

While not an equippable weapon, it is wielded by Vaan during his Staff attack while in EX Mode.

A mysterious staff that increases the spirit for those who hold it. It is said to have been once wielded by a great mage known as a magi. It is said this magi circled the world, dedicating his or her life to helping the sick and wounded, but who exactly this person was is shrouded in mystery. Some places claimed him to have been an old man, while in other areas she was claimed to be a beautiful woman.

A rod used by sages.

The Sage's Rod is a 2-handed rod within the Forsaken Dungeon. It provides 49 Weapon Atk, 9 Durability, +11 Magic Atk, +3 Magic Def, -3 Speed, -1 Consumption Rate, and +6 EXP Gain Rate. Only Clair Andrews can equip it.

Sage Staff is a staff that can be equipped by Yui.

A miraculous staff that a great sage long ago is said to have imbued with the power to resurrect the dead. Raising it up and chanting bestows the raise effect on a single target. [Effect when equipped: +Mind] [Effect when used: Raise]

Sage's Staff is a staff that provides 16 P.ATK, 90 Aim, +4 MND, and casts Raise when used as an item. It can be bought as part of Norende reconstruction from the Adventurer for 1500 pg.

A miraculous staff that a great sage long ago is said to have imbued with the power to resurrect the dead. Raising it up and chanting bestows the raise effect on a single target. 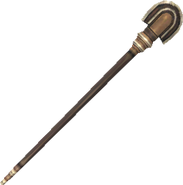 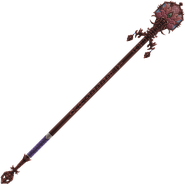 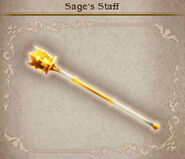 Manikin Staff of the Magi in Dissidia 012 Final Fantasy. 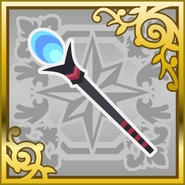 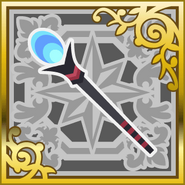 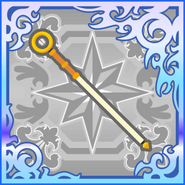 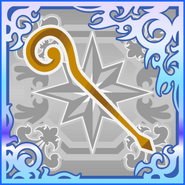 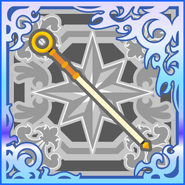 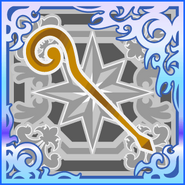 [view · edit · purge]In Latin, Magi is plural of Magus, which means "wizard". Magi is also a term used since at least the 4th century BC to denote followers of Zoroaster, or rather, followers of what the Hellenistic world associated Zoroaster with, which was—in the main—the ability to read the stars, and manipulate the fate that the stars foretold.