The Sage's Cave, also known as Sarda's Cave, is a location from the original Final Fantasy. It is located southwest of Melmond on the other side of the Giant's Cave.

After the Warriors of Light defeat the vampire, they come here in an attempt to learn why the earth is still rotting. They learn from Sadda that the real enemy is deeper within the cave and are given an Earth Rod to neutralize the evil tile blocking the way down to the Lich.

The Background Music that plays inside the Sage's Cave is "Matoya's Cave".

In the Confessions of the Creator Scenario, the Curses and Hopes of Yore Gateway is located in the area the Sage's Cave was located in the original Final Fantasy. The gateway houses a five floor dungeon leading up to a fight with Shantotto, and in the game's story acts as a portal to an alternate dimension where Shantotto ended up after escaping the cycle of war and now conducts magical experiments.

Shantotto's sound files in the Theater refer to the gateway as "Sage's Path", possibly a name for the gateway earlier in development that was not changed on the sound file names when the gateway was renamed. 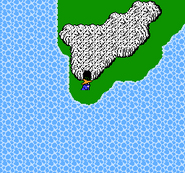 The Curses of Hopes and Yore gateway in World B in Dissidia 012 Final Fantasy.