Dummied intro to the battle

Safer∙Sephiroth is the final boss in Final Fantasy VII. Being Sephiroth's final form, this is his most powerful transformation. This battle is penultimate, but is considered the final challenge of the game, since it is followed by a plot-related battle that is impossible to lose.

The song "One-Winged Angel" plays during the battle, and has since become known as Sephiroth's theme over his original "Those Chosen by the Planet". Sephiroth's lower body has been replaced by a cloud, with six massive blue-tipped wings protruding from where his legs should be. He is shirtless and has two linked halos, one larger than the other, behind him, with the larger one possessing a sun symbol. His hair, now without bangs, curves upwards in a gravity-defying manner. Sephiroth's right arm is replaced by a dark red wing and his face appears angered with his eyebrows furrowed.

-Abilities whose names are not shown when used are highlighted in italics.
-The party cannot escape.
-Safer∙Sephiroth's stats vary based on a number of factors.
-In the original Japanese version, Safer∙Sephiroth had a different AI set-up, abilities, and some abilities functioned differently.

Safer∙Sephiroth's base stats are listed in the table as the low value (except for HP which has a base of 80,000), but they change depending on many variables:

Safer∙Sephiroth's attacks follow an eight turn cycle, allowing the player to predict his next attack and prepare accordingly.

In all versions apart from the original Japanese version, the cycle is as follows:

Safer∙Sephiroth's MP is restored to full at the beginning of every one of his turns, meaning he cannot ever run out.

Safer∙Sephiroth's opening move is Wall, setting Barrier and MBarrier on himself. This cuts the damage the party does, so DeBarrier should be cast right away. He then casts Shadow Flare, a single-target attack capable of 7,500 damage. Next he uses Pale Horse that is a single-target attack that inflicts some damage and always inflicts Sadness, Frog and Small, and a simple but powerful physical attack, which causes always Paralyze, and Darkness.

His other attacks he may use include Break, which is yet another single-target attack which may cause Petrify, a weak attack named Deen, DeSpell, and Super Nova, which is an attack that reduces the player's HP by 15/16 and may cause Confusion, Silence and Slow. Perhaps his most dangerous spell is Heartless Angel, which will reduce the HP of the entire party to 1, but can be blocked and Safer∙Sephiroth will not use it until his HP is low. Furthermore, since it can never defeat the party, they can simply use Heartless Angel as a chance to heal up from the effects of Super Nova.

Safer∙Sephiroth may rise into the air, becoming a Long Range enemy. He cannot be hit by close range physical attacks during this time, but is limited to using Pale Horse, Super Nova, Heartless Angel or Break.

In the original Japanese version, the battle is slightly different. Sephiroth opens the battle with Slow instead of Wall and uses regular Flare instead of Shadow Flare. Pale Horse deals percentage based damage, and Super Nova, which as a different animation, does not deal percentage based damage, and can thus kill the party. In addition, Sephiroth will cast Doom in place of Heartless Angel.

As this is the final battle, the party should go all out with their best Materia and equipment. Ribbons are strongly suggested as Safer∙Sephiroth can inflict dangerous status effects. Mastered Restore and Revive Materia are also recommended and any Elixirs and Megalixirs can come handy. Level 4 Limit Breaks make quick work of Sephiroth, but are not necessary.

As all of Sephiroth's attacks, with the exception of Deen, either cannot KO the victim, or only hit one target, if the player is in great excess of Phoenix Downs, they can simply have one character attack, allow the second person to be KO'd, and the third to use a Phoenix Down on the second. This can fail if Super Nova inflicts Confusion, or if Sephiroth gets enough turns to use Deen. 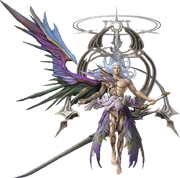 One of Sephiroth's alternate outfits is his appearance as the Safer∙Sephiroth from Final Fantasy VII. Unlike in the original, he still wields his Masamune and retains his legs. The costume also has two other colorations.

The one-winged angel who brings ruthless judgment to bear on all. Using the Planet to gain unimaginable power, the former hero lies in wait to lure Cloud into despair and make the Lifestream his own at last...

Safer∙Sephiroth appears as boss class enemy. He is fought during the Battle Music Sequence: "One-Winged Angel".

Safer∙Sephiroth appears as a boss-type enemy in Battle Music Sequences. 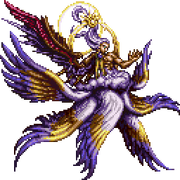 Safer∙Sephiroth appears as an enemy.

Though able to command supernovas, this guy can't even spell his own name.

Safer∙Sephiroth appears as an enemy and is fought on the Outskirts of Midgar and uses Supernova. He gives Death Penalty as loot.

In Super Smash Bros. Ultimate, Sephiroth transforms into this form as part of his Final Smash attack.

Safer∙Sephiroth has a dummied intro monologue taking place over a black screen before fading into the battle. The line in the PC version is slightly different, ending with "Now everything will begin a new...with me!!"[1]

Safer∙Sephiroth having seven wings is an allusion to the number seven, a common theme in games taking place in the Final Fantasy VII universe.

Jason Greenberg, the only artist working on the original PC port, recalled a crash bug that happened during Sephiroth's Super Nova summon. Near the end of the development cycle, many team members were done with their work and simply helped test the game as much as possible. Greenberg has mused he spent at least a full 24 hours playing that one battle.[2] 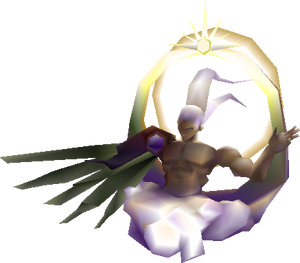 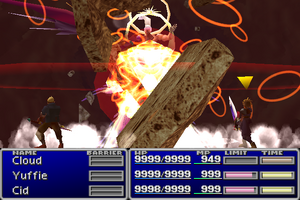 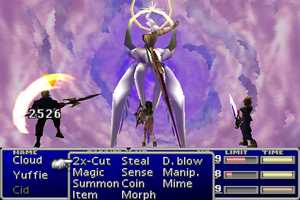 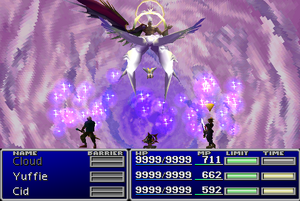 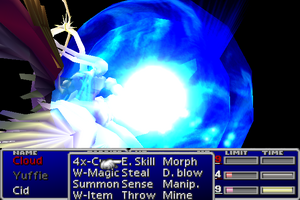 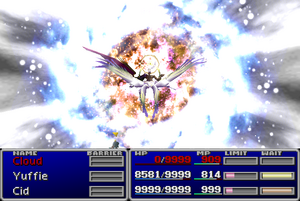 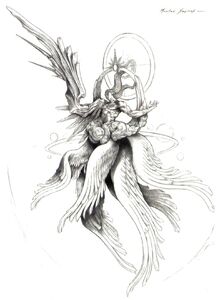 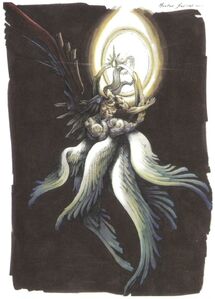 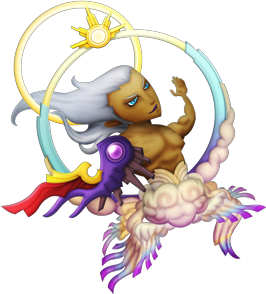 [view · edit · purge]Səphīrōth (סְפִירוֹת, medieval Hebrew form of Sephirot; also spelled Sefirot), is a plural noun in Hebrew; the singular is Sephirah (also spelled Sefira). The Sephiroth are described in the Kabbalah as the manifestations of God that allow Him to manifest in the physical and metaphysical universes. Sephiroth also means "counting" (of numbers).

The boss's name as written in Japanese is "セーファ・セフィロス", or "Sēfa Sefirosu"; "safer" can also be transliterated as "sefer", "sapher", and "sepher". Thus, Safer Sephiroth (Sefer Sfirot) translates to "Book of Numerations" likely referring to the 10 Kabbalistic Sefirot, the ten aspects of creation according to Jewish Mysticism.

Sepher Sephiroth is an index of numbers and their religious correspondences published by Aleister Crowley in The Equinox Vol. 1 Num. 8 in 1912, republished more commonly in 777 and Other Qabalistic Writings of Aleister Crowley. He translates the paper's title as "The Book of Emanations", Sephiroth being the explication of unity through a decimal system.

Safer∙Sephiroth could be seen as a Seraph–a celestial or heavenly being with six colossal wings that literally means Burning Ones, hence the translation of "One-Winged Angel"'s lyrics meaning "burning inside with violent anger"–with a seventh wing in place of his arm.