Detects by Sound
List of Sabotender Enemies
Sabotenders are ambulatory cacti native to the Altepa Desert in Final Fantasy XI. They are well-known among adventurers for their merciless and fierce nature, especially when attacked. Their infamous ability, 1000 Needles, fires one-thousand of the eponymous projectiles at everything nearby. While this assault is survivable when divided across a group, it can easily claim the life of a lonely desert traveler.

Sabotenders are sometimes hunted for valuable Cactus Stems. These can yield lucrative items when properly grown in a mog house's garden. 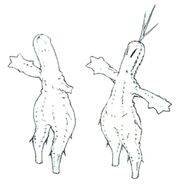