Edgar's twin brother.
When Sabin learns that Figaro has broken its alliance with the Gestahlian Empire, he goes to fight at his brother's side.

Sabin is a playable character in Final Fantasy Record Keeper who could first be recruited during the Challenge Event A Fateful Coin Toss - Ascension and Freedom alongside his brother, Edgar. The pair appeared later in Forgotten Bond, and Sabin alone was recruitable after accepting the Bonus Quest "Complete Mt. Kolts Elite (VI)" and completing it while the Quest system was in force. Both brothers appeared again in Two Sides of a Coin.

Perhaps in homage to his origins and his celebrated status, Sabin remains one of the strongest Monks, having the highest HP for a class that includes the not-quite-so-famous Galuf, Josef, Refia, Zell, and Snow; his other stats are well-aligned with those mentioned. His current drawback is that a few of his Unique Soul Breaks are elemental.

Sabin can equip the following weapon types: daggers and fists. The fist Kaiser Knuckles (VI) allows Sabin to use Rising Phoenix. The fist Dragon Claw (VI) allows him to use Razor Gale.

Global event banner for "Two Sides of a Coin". 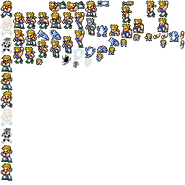