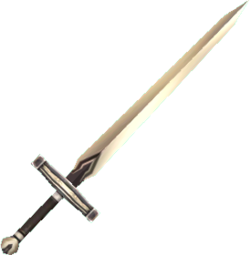 A long sword made for piercing.

The Saber (サーベル, Sāberu?), also known as Sabre, is a recurring low-ranked weapon in the series. It generally is one of the early-game weapons and provides no special bonuses.

The Saber is a low-ranked sword that provides 13 Attack, 5 Accuracy, and 12 Critical, and can only be used by Warrior, Thief, Red Mage, and their upgraded classes. It can be bought for 360 gil at Melmond or Elfheim, dropped from the Buccaneer, or found at Castle Cornelia with the aid of the Mystic Key.

The Sabre is an unused weapon that cannot be equipped by anyone, even if the player has hacked it into the game. The weapon is incomplete and thus has 0 Attack Power with a 100% Hit Rate, and the weapon is categorized as a dagger.

Saber is a sword that provides 36 damage and 240 delay. It deals 9 damage per second and accumulates 64 TP per hit. It can be equipped by level 56 Warrior, Red Mage, Paladin, Dark Knight, and Rune Fencer. It can only be obtained through synthesis.

Sabers are recurring gladiator's arms for use by gladiators and paladins.

If a female human is chosen as the lead party member, she will start out equipped with a Saber. It can be bought in Northeast Town, Undersea Town, Sky Town, and Hidden Town for 2,060 GP. It has 50 uses and an attack multiplier of 6. The damage formula for Saber is based on a unit's Agl.

The Saber can be bought for 3,200 GP in Ashura's Town and Giant's Town, but can also be found in Ashura's Tower. It has 50 uses, it also increases a Robot's HP by 36 and increases their Agl by 8. The Saber deals damage based on the wielder's Agl stat, with an attack multiplier of 9.

The Saber is a level 29 sword that provides 22 Attack. It can be obtained from the shop by trading 8,400 gil.

The Saber is a level 1 sword that provides 18 Attack. It can be obtained from the shop by trading 9,300 gil.

The Saber is a sword within the Forsaken Dungeon. It provides 10 Weapon Atk, 8 Durability, and +1 Magic Atk. It can be bought for 150 gil at the Merchant's Shop. 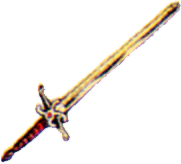 Final Fantasy Legend II.
Add a photo to this gallery