Sea, ports of Besaid and Kilika

The S.S. Liki is a ship in Final Fantasy X that ferries between the islands of Besaid and Kilika. Though it has a sail, it is mainly powered by chocobos.

Both the S.S. Liki and S.S. Winno were named after monks, as revealed by a man aboard the S.S. Winno, although from which temple is not specified.

After Yuna completes the Cloister of Trials and becomes a summoner, the following morning she and various other Besaid islanders board the S.S. Liki. Other than Yuna and her guardians, aboard the ship are the Besaid Aurochs (heading to the blitzball tournament in Luca), the Crusaders bound for Operation Mi'ihen, and other residents of Besaid who are most likely going to the tournament. O'aka XXIII is also aboard the ship and Tidus can invest in his merchant business. Tidus also encounters chocobos for the first time in the engine room.

Tidus and Yuna converse on the deck and she lets him know she believes his story about hailing from Zanarkand and reveals Jecht was her father's guardian ten years ago and told her all about Zanarkand.

En route Sin appears in the waters and the Crusaders fear it is heading toward Kilika. They fight as best they can, but Sin breaks free and attacks Kilika, reducing much of the port and village to ruins. It is implied the 'cargo' on the boat is a Sinspawn to be used for Operation Mi'ihen, and this is why the boat is attacked.

Later, Clasko can be seen standing next to a chocobo if he was told to become a chocobo breeder when he was at Lake Macalania.

At O'aka's first four locations, S.S Liki being the first, the player can donate him gil to start up his business. The amount of money the player gives O'aka determines the prices at his shops at the Mushroom Rock Road, in the following manner:

The Sinscale in both these encounters return until the main boss is defeated.

The theme played during the voyage of S.S. Liki is "Movement in Green". The woman in the Engine Room also hums the "Chocobo Theme".

Wakka, the Black Mage Lulu, the Ronso Kimahri, and Tidus join Yuna on a ship for Kilika. 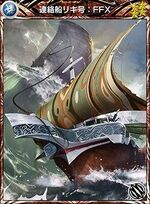 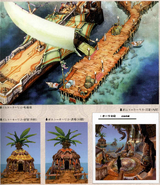 The underside of the ship.

Auron and Braska on S.S. Liki, recorded by Jecht.