Ryukahn Desert is a location in the original Final Fantasy, south of Crescent Lake. In the Final Fantasy Origins releases, it was renamed to Lykion Desert, which was kept for later releases.

It is the place which the Warriors of Light have to visit after obtaining the Levistone from the Cavern of Ice, in order to obtain the Lufenian airship.

The Ryukahn Desert can be found in the story mode overworld of Dissidia 012, at the Elvan Snowlands region. In some storylines, the eponymous Gateway located there is active, and a moogle shop operates here.

In his efforts to save the Warriors of Cosmos from ultimate defeat, Kain Highwind lures his allies there, strikes them down, and hides their unconscious forms in this gateway to await the next cycle. 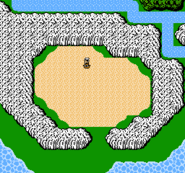